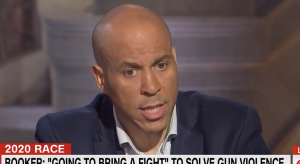 Sen. Cory Booker (D., N.J.) said offering "thoughts and prayers" was a "bullshit" response to shootings in the United States in a new interview with CNN.

"So when I'm president of the United States, I'm taking a fight to this issue like folks will have never seen before, because we're better than this as a country," Booker said. "It's a uniquely American problem. No other country has this kind of carnage. More people in my lifetime have died in this nation due to gun violence than in all the wars from the Revolutionary War to now."

"We're not going to give thoughts and prayers, which to me is just bullshit," he added. "I'm sorry to say that as a man of faith, but I was taught that faith without works is dead. We're going to bring a fight with everything that I have to solve this problem. Because it's solvable, and we know it."

Republican National Committee spokeswoman Elizabeth Harrington ripped Booker in a tweet, comparing his language to Barack Obama's 2008 comments referring to working-class, flyover voters who "get bitter" and cling to "guns or religion."

"We will keep our 1st and 2nd amendment rights, thank you," she wrote.

The Democratic Party has gone from mocking us for "clinging to guns or religion" to saying we will take your guns and your religion is "BS." Beyond offensive.

We will keep our 1st and 2nd amendment rights, thank you pic.twitter.com/38ams05Twd

Booker's campaign touted his gun control plan as "the most sweeping gun violence prevention proposal ever advanced by a presidential candidate."

The Free Beacon reported it "amounts to a collection of the strictest gun-control policies instituted in deep blue states" over the past few decades, including outright bans on certain guns, directing the IRS to investigate the National Rifle Association, requiring federal licensing of all gun owners, and limiting the number of firearms Americans can buy. An NRA spokesman dismissed it as an "extreme gun-control manifesto."