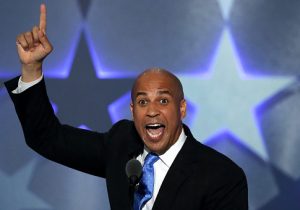 Sen. Cory Booker (D., N.J.) said in an interview published Wednesday that it would be "irresponsible" for him to not consider a presidential run in 2020.

"Of course the presidency will be something I consider. It would be irresponsible not to," Booker told New York Magazine.

The lawmaker has become known for his attention-grabbing antics at Senate hearings, such as berating Homeland Security Secretary Kirstjen Nielsen over alleged racist remarks President Donald Trump made about African countries or declaring he was having an "I am Spartacus" moment during Brett Kavanaugh's Supreme Court confirmation battle.

A tireless campaigner, he is a sought-after voice by liberal Democrats around the country running for office in 2018.

Booker is one of numerous Democrats rumored to be or publicly mulling a White House bid to challenge Trump, many of them also in the U.S. Senate.

Booker said he predicts "lots and lots of people running" but doesn't think it will cause ugly party in-fighting.

"I think there’s going to be lots and lots of people running. But I don’t think it actually has to be ugly. Maybe there won’t be any Democrat-on-Democrat violence," he said.

Booker has made a major shift to the left since the beginning of the Trump administration, announcing support for "Medicare for all," supporting a federal jobs guarantee, and calling for the legalization of marijuana. However, he's also frustrated progressives at times, such as when he voted against a bill that would allow Americans to buy prescription drugs from Canada.

"He’s definitely in that top tier of people, but he doesn’t have people in his corner," a veteran Democratic strategist told New York Magazine. "He very much came up through the traditional political pathways—he was for Wall Street before he was against it—and though he’s taken a lot of positions that, in conventional thinking, aligned him with the progressive wing of the party, the question is: Why him, why now?"