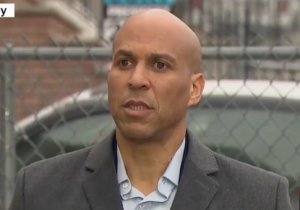 Sen. Cory Booker (D., N.J.) on Friday said he does not want to "do away with" private health insurance, despite signing on as a co-sponsor of Sen. Bernie Sanders's (I., Vt.) "Medicare for all" bill in 2017.

The junior senator from New Jersey curiously voiced support for private insurance after facing multiple questions on the subject in the hours after announcing his presidential run. Booker released a glossy two-minute video announcing his candidacy on Friday Morning, joining a crowded Democratic field vying for the opportunity to challenge President Donald Trump in 2020.

After avoiding giving a direct answer to the question during an interview the same day, the New Jersey Democrat was asked at a press conference whether he would "do away with private health care."

"Even countries that have vast access to publicly offered health care still have private health care, so no," Booker said.

However, many have concluded Sanders's "Medicare for all" bill describes a health care system that would effectively eliminate private insurance. The plan would "eliminate existing private insurance for 180 million Americans within four years, and bar insurers from covering a wide swath of medical benefits thereafter," Washington Examiner Executive Editor Phillip Klein wrote.

Tim Garson Jr., a physician who oncer served as president of the American College of Cardiology, wrote an op-ed in USA Today expressing his opposition to "Medicare for all" plans. He said the formation of a national single-payer health care system "would effectively eliminate private health insurance as we know it. Insurers and employers would be prohibited from offering most forms of health care coverage."

The New York Times published a piece in response to Sanders's proposal, titled, "How Medicare for All Would Affect You." It describes the impacts of Sanders's plan, including how it would "have big effects on the health care industry, since it would eliminate private health insurance and change the way medical providers and drug companies were paid."

At the time Sanders introduced his plan, Booker said, "This is something that’s got to happen."

"Obamacare was a first step in advancing this country, but I won’t rest until every American has a basic security that comes with having access to affordable health care," Booker  told NJTV News.

The issue of whether to eliminate private health insurance has caused some controversy with Democratic candidates running for president. Sen. Kamala Harris (D., Calif.), who recently announced she was running for president, received criticism for calling for the elimination of private health insurance plans during a televised town hall hosted by CNN in Des Moines, Iowa on Monday.

"Well, listen, the idea is that everyone gets access to medical care, and you don't have to go through the process of going through an insurance company, having them give you approval, going through the paperwork, all of the delay that may require. Who of us has not had that situation where you've got to wait for approval, and the doctor says, ‘Well, I don't know if your insurance company is going to cover this.' Let's eliminate all of that. Let's move on," Harris said.

Sen. Elizabeth Warren (D., Mass.) was also asked about whether she there believed there was room for private health insurance in her vision of the ideal American health care system, but she dodged questions on the issue.

"Let's start with the battle we're having now and talk about the things we need to be doing, because I don't want to lose sight of this," Warren said. "It is good to talk about our overall goal, and here's our goal, this is what distinguishes Democrats from Republicans: Democrats believe health care is a basic human right."