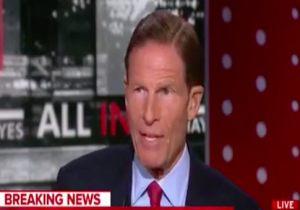 Sen. Richard Blumenthal (D., Conn.) said on Thursday that Sen. Dianne Feinstein (D., Calif.) was following the "foundational principle" to let sexual assault survivors come forward on their own terms but shrugged off the leaks from the Senate that ultimately led to Dr. Christine Blasey Ford going public with her allegations against Brett Kavanaugh.

MSNBC host Chris Hayes asked Blumenthal and Sen. Maggie Hassan (D., N.H.) about allegations made by Republican Senators that Feinstein "sat on this" and that it was all done "in bad faith."

"An argument that Republicans have been making," Hayes said, is that the allegations "leaked out and it was a bomb exploded at the last minute as a sort of desperate attempt to forestall" Kavanaugh's confirmation.

"Let's be very clear," Blumenthal said. "The foundational principle of dealing with sexual assault [is that] the survivors have the right to come forward when they wish to tell their story, as they wish, and identify themselves when they think it's appropriate."

"It leaked though," Hayes said. "Someone didn't follow it."

"After six weeks in the United States Senate, a lot of things leak," Blumenthal said.

Ford alleges that when she and Kavanaugh were in high school in the early 1980s, the future Supreme Court nominee held her down at a party, groped her, and covered her mouth in an attempt to muffle her screams.

Kavanaugh has denied the allegations completely and received support from others, including former classmates, girlfriends, and even President Donald Trump.

Blumenthal told NPR on Sept. 5 that he would be voting against Kavanaugh's nomination, well before the allegations by Ford became public.

"If their instinct and intention was to uncover the truth, they would insist on an FBI investigation. Otherwise we're going to have a sham and a charade show hearing, not a real hearing," he said.

Ford has not confirmed whether or not she will testify publicly or otherwise in the next week before the Senate Judiciary Committee. Chairman Chuck Grassley (R., Iowa) has set a deadline of Friday morning to confirm that Ford will appear on Monday.

Ford's legal team is currently negotiating the conditions under which she will testify in the future. She wants an FBI investigation of her claim before she agrees to testify, although it appeared Thursday that it wasn't a potential deal-breaker.