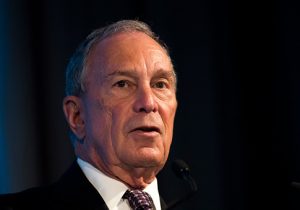 Voters wanting to know more about Michael Bloomberg's tenure as mayor as he considers a presidential run won't get much useful information from the New York City archives, although theoretically hundreds of thousands of important records and communications should be available six years after he left office.

Although there are serious transparency issues at stake, media reporting has been scarce on the lack of Bloomberg documents at the city’s archives, with the notable exception of a 2016 report by the New York Daily News.

"Not a single email sent by Bloomberg during his tenure has been made available for public inspection," the Daily News reported in March of that year. "The only electronic correspondence that has been cleared and processed for review at the Municipal Archive in Lower Manhattan comes from a handful of Bloomy's top staffers, and only over the first seven months of his 12 years in office."

The Washington Free Beacon contacted the city's archives for an update on obtaining new documents or publishing documents already in the city's possession in the time since the Daily News report. Although officials initially acknowledged the Beacon's email requests, they later stopped responding.

Adding to the complexity is the fact that Bloomberg relied almost exclusively on his own private email address and server during his tenure, echoing the scandal that dogged a significant portion of the Hillary Clinton campaign in 2015 and '16.

"There is no law banning elected city officials from using their private addresses for work matters," the Daily News report noted.

"Bloomberg has contended that he obtained permission to use his private account upon taking office in 2002, when the city's Conflicts of Interest Board ruled the mayor could donate a number of his company's proprietary computer terminals to City Hall."

Efforts by the Free Beacon to contact a spokesperson with Bloomberg for comment were either unsuccessful or were not returned.

While there are obvious parallels between Bloomberg and Clinton's use of private emails during their tenures in government power, there's an even more direct historical analogy: Rudy Giuliani.

When leaving office in 2001, just three months after the 9/11 terrorist attacks, Giuliani and his friends created a leadership think tank to which they handed over the majority of his records during his time as mayor. Giuliani eventually caved to public pressure and turned the documents over to the city.

However, media outlets continued to scrutinize the actions because Giuliani was considering a presidential run in 2008, just as Bloomberg is now.

"Giuliani's presidential aspirations ride largely on the glowing publicity he received as a strong and calming influence after the Sept. 11, 2001, attacks on the World Trade Center," said a 2006 Chicago Tribune report titled, "How Giuliani tried to control his NYC legacy."

"He also is running as a law-and-order candidate who presided over New York's sharp drop in crime in the mid-1990s.

"But his two terms as mayor also were marked by bitter disputes and frequent court battles with other officeholders, civic groups and news organizations over what many observers regarded as the Giuliani administration's unwarranted secrecy on basic public information."

On the more current issue, the 2016 Daily News report noted that, "Until the [Bloomberg administration] emails are processed and made available, access to them can be sought by filing a request under the state Freedom of Information Law."

However, New York's Freedom of Information Law is notoriously slow and inconsistent across government agencies, and in many cases litigation is required to pry the documents loose, a costly and time-intensive endeavor.

When the Giuliani controversy arose in 2002, Bloomberg subtly came to his predecessor's defense in a way that would foreshadow his own issue with archived material.

"I think that anything that makes it more difficult to get information is unfortunate," Bloomberg was quoted as saying in 2002 by the New York Times. "But some of these documents are documents that the mayor has a right to have, and I am sympathetic if he would prefer that you didn't look at them. The law is clear. You have a right to get those documents under the freedom-of-information law, and Mayor Giuliani would certainly comply with that law."

UPDATE 10:10 A.M.: Daily News reporting was misidentified as coming from the Post.