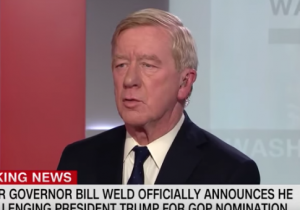 Bill Weld, a two-term Massachusetts governor and Libertarian vice presidential nominee, announced Monday that he is challenging President Donald Trump in the Republican primary for president.

Weld appeared on CNN's The Lead to make the announcement that he would be running as a Republican to challenge Trump, saying it would be a "political tragedy" and he would "fear for the republic"  if Trump secured another term in the White House.

Host Jake Tapper discussed some of the realities that Weld would face, including the $30 million that the Trump reelection campaign raised in the first quarter and how the Republican National Committee is an extension of Trump's campaign.

"Do you really think you can defeat him?" Tapper asked.

"Yeah, I do. I've done it before and particularly in New Hampshire where I'm spending a lot of time, it's one vote at a time and one voter at a time and you got to meet them, but what we have now is a president who mocks the rule of law," Weld said. "I spent seven years in the Justice Department trying to keep the politics out of law enforcement. He's trying to put in."

He went on to talk about how he will be targeting New England states, California, Washington, and Oregon because they have open primaries. Rather than getting his votes from registered Republicans, he's seeking to win the primary by getting momentum in those states where he could get independents to "cross over" and vote for him in the GOP primary.

"All six New England states, the mid-Atlantic states, California, Oregon, Washington—very receptive territory. The president is not well liked in California," Weld said. "It would be a national campaign. Twenty states do permit that crossover voting, which is more than a beachhead, so I'm very much looking forward to the campaign."