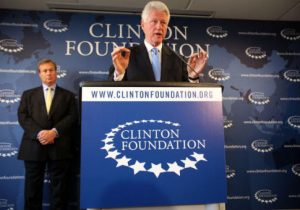 Former President Bill Clinton smiled and ignored a reporter on Monday when she asked him about the recent sexual misconduct allegations levied against Democratic Sen. Al Franken (Minn.).

NBC News correspondent Tammy Leitner was in Puerto Rico, where Clinton arrived on Monday to survey hurricane damage and observe recovery efforts. She told MSNBC host Kasie Hunt that she asked Clinton about the allegations against Franken.

Days after Los Angeles radio host Leeann Tweeden accused Franken of forcibly kissing and groping her without her consent in 2006, another woman came forward with a similar allegation Monday, claiming that the senator groped her butt in 2010. Franken apologized to Tweeden for his actions but said he does not remember the alleged incident with the second woman, Lindsay Menz.

"I feel badly that Ms. Menz came away from our interaction feeling disrespected," Franken said in a statement.

Amid the allegations embroiling Franken, Hunt brought up the way in which Clinton's own scandals relate to the senator's recent troubles, noting Democratic Sen. Kirsten Gillibrand's (N.Y.) comment last week that Clinton should have resigned the presidency due to his extramarital relationship with White House intern Monica Lewinsky.

"Tammy, I want to ask you one more thing quickly on a slightly different topic since had you a chance to talk to Bill Clinton," Hunt said. "He has been back in the news with the senator from New York, Kirsten Gillibrand, suggesting he would have had to resign in the current climate and, of course, Democrats facing questions about Senator Al Franken's conduct."

"Any chance you talked to him about that?" Hunt asked.

"I did, Kasie. I asked him about the senator's recent comments, and he looked at me, kind of half-smirked, and kept going," Leitner replied.

"He wanted nothing to do with that, so he didn't give us an answer," Leitner added.

Clinton has faced increased scrutiny for his past sexual behavior, as sexual harassment and assault allegations against him have garnered newfound attention following scandals in Hollywood, the media, and politics. Liberal commentators besides Gillibrand have recently expressed dissatisfaction with how the Clinton scandal was handled.

Franken has called for an investigation into his own conduct but does not plan on resigning.