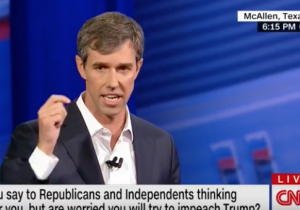 Texas Democratic Senate candidate Beto O'Rourke on Thursday attempted to deflect a question about whether his objective as a senator would be to impeach President Donald Trump, but after being pressed by the moderator he admitted he still supports impeachment.

O'Rourke currently represents the state's 16th Congressional District in Congress and appeared at a CNN town hall moderated by Dana Bash in McAllen, Texas, as he continues his campaign to unseat Sen. Ted Cruz (R., Texas). One of the first questions of the town hall revolved around what O'Rourke would say to Republicans and independents who believe that his main objective is impeaching Trump.

O'Rourke completely dodged the impeachment part of the question and talked about his vision of bringing Texans together regardless of their of political affiliations. He said that he could take voters "for granted," but he said he doesn't want to do that because he wants to incorporate everyone's story into his campaign. After he finished his response, Bash pressed him on the impeachment part of the question, noting that he said in July that he would vote to impeach Trump as a member of the House of Representatives.

"Have you changed your mind?" Bash asked.

"I haven't. Let me put it this way. There may be an open question as to whether the president, then the candidate, sought to collude with the Russian government in 2016," O'Rourke told the audience, before quoting conservative columnist George Will to justify why he should be impeached.

"To quote George Will, a very conservative columnist, when we saw him on that stage in Helsinki defending Vladimir Putin, the head of the country that attacked our democracy in 2016 instead of this country, its citizens, and this amazing democracy. That was collusion in action," O'Rourke said. "[And when in] broad daylight, on Twitter, he asked his attorney general, Jeff Sessions, to end the Russia investigation, I would say that's obstruction in action."

Bash said O'Rourke has supported impeachment before Special Counsel Robert Mueller's investigation has concluded. She then cited the Constitution, saying impeachment means charging the president with having "committed the crime of treason, bribery, or high crime and misdemeanor."

"I would liken impeachment to an indictment. There is enough there to proceed with the trial for a full vetting of the facts and to make the best-informed decision in the interests of this country and our future," O'Rourke said. "All I am saying is that there is enough there, and I think I laid out the case in both the collusion with a foreign power and the effort to obstruct justice going forward."

"I do think there is enough there for impeachment, and if asked I would vote on it," he added.