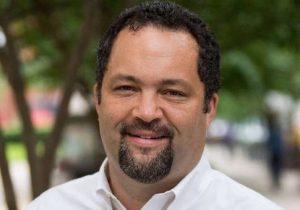 Navigating the issue of the anti-Israel Boycott, Divestment, and Sanctions (BDS) movement has proved challenging for Democrat Ben Jealous in his Maryland run for governor.

Jealous is running to unseat Gov. Larry Hogan (R., Md.), a popular incumbent who last year signed an executive order banning the state from doing business with companies that join the movement to boycott Israel.

Jealous, who as an activist traveled in circles with anti-Israel radicals such as Linda Sarsour, was asked about Hogan's anti-BDS executive order by a Baltimore-based Jewish publication and said he would keep it in place if elected.

"I have found that success is never built by trying to punish one side of a conflict," Jealous told JMORE during a September interview. "That is why I believe the BDS movement is counterproductive and simply another hindrance to peace."

Jealous failed to come out against BDS, however, during a meeting with Muslim voters last weekend when he was asked whether he would rescind Hogan's executive order.

Jealous said he was "very confident" the courts would find Hogan's executive order unconstitutional, but would consider rescinding it if the courts uphold the order, which is being challenged by the American Civil Liberties Union.

Jealous did not say a single negative word about the BDS movement, according to video of the question and answer posted by the Muslim Community Center, which can be viewed below.

"My belief is that the court will ultimately invalidate it," Jealous said. "There should have been open debate before any executive order was passed."

"I don't think, quite frankly, I suspect that the issue will be taken care of by January next year," he said.

The questioner pressed Jealous for a more direct answer to his question, but Jealous again deferred to the courts.

"Let's see what happens with the courts first," he said.

It is unclear why Jealous would pledge to keep the order in place if he believes it is unconstitutional. The Jealous campaign did not respond to a request for comment.

Jealous has made a concerted effort to distance himself from radical activists such as Sarsour. He told JMORE that despite their history of working together on other issues, they have "different views on the best way to achieve peace for the Israeli and Palestinian people."

Jealous and Sarsour have worked together extensively in the past.