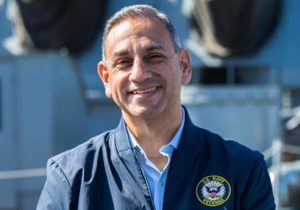 A Democratic candidate in California who was accused earlier this year of sexual harassment is declining to comment on the national firestorm over the allegations of sexual misconduct dating back three decades against Supreme Court justice nominee Brett Kavanaugh.

Last week, during a private event with Democratic supporters in California, Gil Cisneros pointedly tried to avoid the topic that was roiling Washington and captivating national attention.

Asked during a private house party in Walnut Creek, Calif., for his thoughts about the accusations Kavanaugh is facing, Cisneros said he didn't want to comment because he didn’t "know what happened there."

"I don't know that situation or what happened there, and I'm not gonna comment on that," Cisneros said, according to a recording of his comments to Democratic supporters attending the event. "Just because I don't know what it was—what that situation was."

Cisneros quickly tried to redirect the conversation to policy issues.

"I think the things I'm going to focus on when I go to Washington are really going to be, like I've said, education, healthcare. I want to do right by our veterans. I think they deserve that."

"His silence is as loud as it can be: He has a problem with women," she told the Washington Free Beacon Tuesday. "He still hasn't said anything publicly or on the record about it. Why is he afraid to talk about it?"

The race to fill Royce's seat has tightened in recent days, with a new poll released late last week showing Kim with a 4-point lead over Cisneros. The seat is one of a handful of critical must-wins for Democrats in California in their quest to flip House control.

Fazli, who ran an unsuccessful Democratic campaign for California Assembly this year, in May accused Cisneros of attempting a sexual "pay for play" outside an elevator during the Democratic Party convention in San Diego in February.

The campaign issued a lengthy statement in May denying Fazli's story.

"I have given him plenty of opportunities to come clean, come forward—say anything," she said. "He outright deceived and outright lied. He has a problem with women. I don't believe I am the only one."

The Cisneros campaign did not return a Free Beacon request for comment.

Fazli said she has faced an enormous, ongoing pressure campaign to stop talking about her experiences with Cisneros and harassment from within the California Democratic Party after coming forward.

Despite the pressure, she said she has no plans to back away from her allegations because she wants to ensure that no other woman has to deal with unwelcome and inappropriate advances from Cisneros.

Fazli implored other women with accusations about Cisneros’ inappropriate behavior to come forward in a mid-May YouTube video.

"It took every fiber of my being to come forward. For the past two weeks I have suffered from depression and anxiety because of the silence from Mr. Cisneros. … I have spoken to numerous amounts of journalists who I've given ample evidence including people I told at the time the events happened," she said in the video.

Fazli back in May tweeted out a lengthy statement detailing what she describes as Cisneros' "inappropriate behavior" and said she knew there would be people who would publicly "flog me" for coming forward, but "I thought it was necessary to let people know what kind of man Cisneros is."

In her account, she said she had an "inappropriate encounter" with Cisneros outside an elevator at the San Diego Bayfront Hotel during the California Democratic convention on Feb. 24, 2018.

At around 11 p.m, she said she had just left Rep. Maxine Waters' (D., Calif.) party when she ran into Cisneros outside the elevator and asked him for a donation to her campaign. She said he appeared "intoxicated" and asked her jokingly "why does everyone come to me for donations" before suggesting "out of the blue" that they go back to her hotel room.

"I was shocked, but quickly excused it because he was intoxicated," she recalled. "I responded, ‘I don't think so Gil, and I don't think my two roommates would approve,'" while laughing.

She said she wouldn't have given it another thought if not for a subsequent follow-up conversation when she called him a week later asking for the donation.

When Fazli explained why she did not endorse him as the preferred Democrat for his congressional race during the state convention, she said he asked, "Well, what are you going to do for me?"

"I went into this whole spiel about my ground game hoping to impress him that I would be a very active candidate," she said. "Then he interrupted me and in a different tone and slowly said, ‘No, Melissa. I mean what are you going to do for me?'"

After the previous encounter outside the elevator in San Diego, she said she thought he "wanted to have sex with me in exchange for a $4,400 donation."

"The interaction between Fazli was witnessed by [Cisneros campaign staffer] Thomas Rivera," the campaign said in a statement. "Rivera confirms Cisneros's account that he was neither intoxicated nor did he proposition Fazli."

"Fazli asked Cisneros for a campaign donation, to which he declined. In addition, multiple individuals interacted with Cisneros as he was headed to, and throughout the SEIU United Healthcare Workers event, all who report Cisneros being lucid and sober," the statement said.

Fazli says there was no one else present at the time of their conversation outside the elevator.

The Congressional Leadership Fund, a super PAC closely aligned with Republican leaders, released an #MeToo-themed ad in early September arguing that "Time's up" for Cisneros.

"Gil Cisneros thinks the rules don't apply to him," Courtney Alexander, CLF's communications director said in a statement. "Gil Cisneros has been accused of sexually harassing a fellow California Democrat, inviting himself to her hotel room and demanding sex in exchange for funds. California voters deserve better than Gil Cisneros."

Republicans also have funded at least two mailers about Fazli's accusations, arguing that "In the #MeToo era, Women Can't Trust Gil Cisneros to Stand Up For Them."

"Sleazy Cisneros Won't Stand Up For Women. Stop Him November 6!"

According to Cisneros' website, his endorsements include: the California Democratic Party; California Democratic Reps. Ted Lieu, Julia Brownley, and Alan Lowenthal, as well as former Rep. Loretta Sanchez; the Sierra Club; Planned Parenthood; and the Service Employees International Union of California and several other unions.