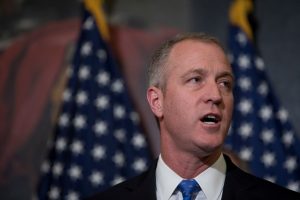 Rep. Sean Patrick Maloney (D., N.Y.), a candidate for New York Attorney General, said he doesn't "give a f—k" what fans of President Donald Trump say about his aggressive rhetoric toward the White House, adding his family is "in the crosshairs of these a—holes."

Maloney, who is gay and has two adopted children with his husband, released his first TV ad before the Sept. 13 primary election where a narrator called the current political climate a "fight there's just no running from."

"I feel like there’s a group of men led by Donald Trump who have shown up in the front yard, and they’re getting ready to tear this house apart," Maloney says while seated in his kitchen. "And I’m going to stand in the hallway with a baseball bat. Because I don’t have any choice. My kids are upstairs, asleep."

Asked to explain the ad during a "running town hall" by City & State New York reporter Jeff Coltin, Maloney said it was akin to "self-defense."

"The baseball bat is about defending your home and your family when someone’s coming through the front door and you have nowhere to run," he said. "That’s not violence, that’s self-defense. That’s making a decision that you’re going to make a stand or go down swinging."

When Coltin wondered if Trump supporters might be offended by such rhetoric, Maloney had a sharp reply.

"I don’t give a fuck what the Trump fans say. That’s not what this is about," he said. "This is about speaking from the heart. About a family I’ve built for 25 years that’s in the crosshairs of these assholes. And doing something about it."

Coltin drew parallels between Maloney and Rep. Maxine Waters (D., Calif.), who has made headlines with her invectives directed at Trump—and which she's received from him in return. In a particularly controversial moment in June, Waters urged fellow opponents to harass members of his administration in public.

"It feels like the people who are fueled by hate, demagoguery and anger have their shit together, and those of us who want to talk about love and hope and inclusion have been hiding in the shadows," Maloney said. "And it’s time to get out of the shadows and at least defend our ground. But I’d rather even get on offense."

If he doesn't win the nomination for attorney general, he will seek re-election to his seat representing New York's 18th Congressional District, which covers the northern suburbs of New York City. It went narrowly for Trump in 2016 over Hillary Clinton.

The National Republican Congressional Committee ripped Maloney's comments, saying he had insulted his own constituents.

"If Maloney doesn’t win the primary for Attorney General, he just used that baseball bat on his own re-election campaign," NRCC spokesman Chris Martin said.

Maloney is running in second in a crowded race to replace Eric Schneiderman, who resigned in May after being accused of multiple women of assaulting them during romantic relationships. He trails New York City Public Advocate Letitia James, and he's also facing left-wing favorite Zephyr Teachout and Leecia Eve, a former aide to Hillary Clinton and Gov. Andrew M. Cuomo (D.).

UPDATE: 2:18 P.M.: This article was updated with the NRCC's statement.