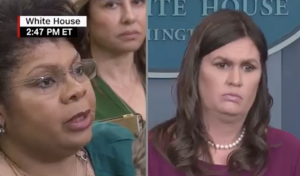 "With all of this turmoil, particularly this last week, has the president at any time thought about stepping down before or now?" Ryan asked.

"No, and I think that's an absolutely ridiculous question," Sanders said.

Ryan retorted, "It's not ridiculous," as Sanders moved onto another reporter.

The FBI raided the office of Trump's lawyer Michael Cohen on Monday, angering Trump, who called the executed search warrant a "disgrace" and continued to call the overall Russia investigation by special counsel Robert Mueller a "witch hunt."

Cohen is being investigated for possible bank fraud, wire fraud and campaign finance violations, according to reports.

Sanders said earlier in Tuesday's briefing Trump believes he has the power to fire Mueller if so inclined, which top Republicans have warned the president against doing.