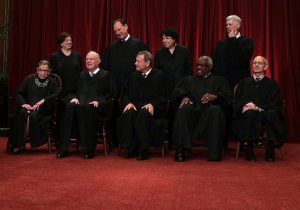 Appointed by President Ronald Reagan, Kennedy has served on the Supreme Court since 1988. Kennedy wrote a letter to Trump announcing he would step down from the court effective July 31.

"This letter is a respectful and formal notification of my decision, effective July 31 of this year, to end my regular active status as an Associate Justice of the Supreme Court," he wrote.

He added it is the "highest of honors to serve on this Court" and expressed his "profound gratitude" to have had the privilege.

Kennedy's exit sets up a showdown this year in the Senate over whomever Trump nominates to fill his spot.

Trump appointed Neil Gorsuch last year to fill the seat of Antonin Scalia, who died in 2016. Democrats are still angry about Senate Republicans not giving a hearing and vote to President Barack Obama's nominee to replace Scalia, Merrick Garland.