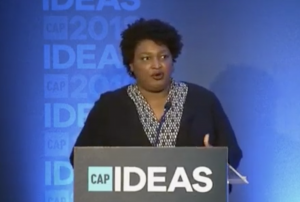 Democrat Stacey Abrams told the Center for American Progress on Wednesday that "we won" in Georgia in 2018 because her gubernatorial campaign embraced identity politics rather than shying away from it.

After stipulating earlier in her remarks that Republican Brian Kemp was the actual governor of Georgia and she wasn't, Abrams discussed how her campaign successfully engaged minority communities to vote in 2018.

"For those of us who are in this coalition of new and engaged, who are in this pursuit of progress, we have to recognize that the internal threat we face is a fear of who we are," she said. "The notion of identity politics has been peddled for the last 10 years, and it's been used as a dog whistle to say that we shouldn't pay too much attention to the new voices coming into progress. I would argue that identity politics is exactly who we are, and it's exactly how we won."

Stacey Abrams at #CAPideas: "I would argue that identity politics is who we are — it's how we won."

Abrams rejected the idea that voter suppression didn't happen in Georgia, in spite of a spike in voter participation from 2014 to 2018 and her getting more votes than any statewide Democrat in Georgia history. She has repeatedly refused to concede and frequently blasted Kemp, calling him a "cartoon villain" and an architect of voter suppression as Georgia's secretary of state before becoming governor.

She has also repeatedly said she "won" the race due to the relative success of her campaign. She finished nearly 55,000 votes short of Kemp's total.

"I cannot say that everybody who tried to cast a ballot would've voted for me, but if you look at the totality of the information, it is sufficient to demonstrate that so many people were disenfranchised and disengaged by the very act of the person who won the election that I feel comfortable now saying, ‘I won,'" she told New York Times Magazine.

Kemp's purging of 1.4 million voters from the rolls during his tenure is central to her complaint that his victory was tainted, but the updating of accurate voter records was in accordance with federal law. Kemp also took Democratic criticism for executing "Exact Match" laws that placed thousands of ballots in "pending" status; such voters were still able to cast ballots with proper IDs.