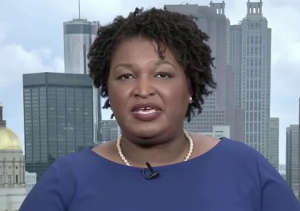 The newly minted Democratic candidate for governor of Georgia is a proud member of the ‘resistance' movement.

Stacey Abrams appeared on MSNBC with Hallie Jackson Wednesday, one day after winning the Democratic primary by a wide margin. While discussing her campaign, the candidate was asked if she considered herself part of the resistance movement, which sprang up after the 2016 election in opposition to President Donald Trump.

Abrams didn't equivocate, stating she was "absolutely" a member of the resistance and her campaign was centered around "resisting" any "conversation" that seeks to take the nation "backward."

"Absolutely, we are resisting the xenophobia that's coming out of [Washington,] D.C., we're resisting the temptation to actually hurt working families by passing the tax scam," Abrams said. "We're resisting any conversation that says we have to go backward."

The Democrat added that her campaign was following an unconventional strategy premised on bringing "every voice to the table."

"I'm running a campaign on a new playbook where we bring every voice to the table," she added. "If you look at our victory last night, we won across the state."

Jackson, citing the fact that former President Barack Obama failed to carry Georgia–even with extensively high turnout–in both his presidential campaigns, asked Abrams how she planned to make inroads with voters outside of the traditional Democratic camp.

Abrams expressed Georgia was a changing state and her campaign would appeal to independent voters by touting such issues as Medicaid expansion and education.

"We win with a message of progress, and here's the thing, that was a decade ago. Georgia is a very different state than it was even ten years ago," Abrams said. "We're speaking to all Georgia voters, but we're also speaking to those independents who know that they want progress for their family, want [a] good education, want the expansion of Medicaid, want help for their small businesses."

Abrams declared that Democrats didn't have to compromise on their progressive credentials or appeal to Republicans to find success at the ballot box.

"We don't have to pivot to conservative values to win Georgia," she said. "We just have to speak about our own values and have bold and detailed plans about how we're going to make it work."

Abrams, a Yale-educated lawyer who has penned eight romance novels under the pseudonym Selena Montgomery, is a longtime fixture in Georgia's political scene. While serving as minority leader of the state House of Representatives from 2011 to 2017, Abrams cut a progressive profile championing public education, a $15-an-hour minimum wage, and abortion rights.

The Georgia Democrat has also courted controversy on multiple occasions. In 2012, Abrams triggered rebuke from her colleagues in the state legislature after accusing Republicans of attempting to re-segregate the South. In April, Abrams headlined a speech at the Democracy Alliance's spring conference, where wealthy donors promoted universal healthcare, free college tuition, and reparations, the Washington Free Beacon reported.

Abrams' defeat of the more moderate former state Rep. Stacey Evans in Tuesday's Democratic primary makes her the first black woman nominated by any major party for governor. While numerous media outlets were quick to point out the historical threshold Abrams crossed, few noted that more individuals voted in Tuesday's Republican primary than the Democratic. Democrats have failed to carry Georgia at the presidential level since 1992 and the last Democrat elected governor in the state was Roy Barnes in 1998.

Pending the outcome of the Georgia Republican gubernatorial runoff on July 24, Abrams will face either Lt. Gov. Casey Cagle or Georgia Secretary of State Brian Kemp in November.