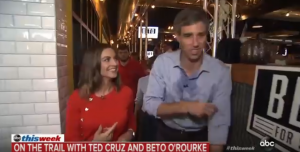 ABC reporter Paula Faris told Texas Democratic Senate candidate Beto O'Rourke that he was a "rock star" in footage from a campaign event that aired Sunday on "This Week."

"You're a rock star … You really are," she said as supporters of O'Rourke cheered as he walked past them. She noted how he couldn't go 10 feet without an interruption from one of his supporters. O'Rorke denied that he was a rock star and said that his campaign has employed a simple strategy of showing up everywhere all the time for everyone.

Faris continued to praise the progressive candidate for his ability to raise huge sums of money.

"O'Rourke, a three-term congressman, has captured the nation's attention as well. Hauling in a record $38 million in donations last quarter," Faris said.

Video: In recorded piece aired on Sunday’s #ThisWeek, gushing ABC News reporter @PaulaFaris exclaimed of @BetoORourke as she walked with him through cheering supporters: "You’re a rock star! No, you really are!" pic.twitter.com/0rqwRrtxhe

O'Rourke told reporters earlier in the week that he will not share his whopping haul with fellow Democrats as they face an uphill battle to get a majority.

Faris also noted O'Rourke has been criticized by President Donald Trump on Twitter.

"President Trump has called you a flake. He said you're a total lightweight," Faris told O'Rourke.

"I don't know that it makes any sense to respond. I think the kind of bitterness and name-calling and partisanship that has unfortunately defined so much of the national conversation, you can add more to it, or you can stay focused on the future and why you did this in the first place. That's what we've chosen to do," O'Rourke said.

Despite the huge fundraising numbers, he trails in the polls against incumbent Sen. Ted Cruz (R.). The RealClearPolitics average of polls shows Cruz with a seven-point lead.

The Texas Democrat has been the recipient of numerous glossy profile pieces and national media attention for running a progressive campaign in a red state like Texas. O'Rourke has advocated for gun control and has backed protests during the national anthem. In a BBC interview, he refused to disavow socialism.