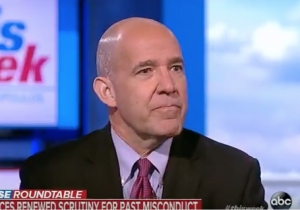 ABC News chief political analyst Matthew Dowd called Supreme Court Justice Clarence Thomas a "sexual predator" in a tweet Monday, saying it was an outrage that he was confirmed after Anita Hill's allegations against him.

Supreme Court nominee Brett Kavanaugh has denied an accusation by Christine Blasey Ford that he drunkenly attacked and groped her at a Maryland house party in the early 1980s. The sexual assault charge is drawing comparisons to Hill's accusation in 1991 that Thomas frequently harassed her with sexually explicit language when he supervised her at the Department of Education and Equal Employment Opportunity Commission.

Dowd, a fierce critic of the Trump administration, tweeted, "It was despicable and outrageous what happened to Anita Hill more than 25 years ago, and a sexual predator was given a lifetime seat on the SC. Let's hope history doesn't repeat itself in 2018."

It was despicable and outrageous what happened to Anita Hill more than 25 years ago, and a sexual predator was given a lifetime seat on the SC. Let’s hope history doesn’t repeat itself in 2018.

Thomas has always denied the accusations by Hill, famously calling the situation at the time a "high-tech lynching."

The charge against Kavanaugh has similarly rocked his confirmation process when he appeared to be sailing toward a successful vote in the Senate. Both Ford and Kavanaugh have indicated they are willing to testify under oath about the alleged incident.

Thomas barely survived the charges made by Hill, getting confirmed by a narrow 52-48 vote. He has since been one of the more conservative voices on the Supreme Court.

Dowd said last week that he does not know whether the allegations against Kavanaugh are true, but he wrote it was a sign of guilt that he released a list of women testifying to his good character. He also tweeted that Ford should be believed in this situation, writing, "Enough is enough."

I don’t know if the allegations against kavanaugh are true, but keep in mind every high profile man accused of sexual abuse denies it and has released a list of women saying they are a good guy. And each one turned out to be an abuser.

Although Dowd refers to himself as a "proud independent" in his Twitter profile, he routinely espouses liberal opinions. He has called on Texas voters to support progressive Democratic Senate candidate Beto O'Rourke, suggested that Trump nominate Merrick Garland to the Supreme Court, and attacked Nikki Haley for criticizing a book that falsely intimated she had slept with Trump.