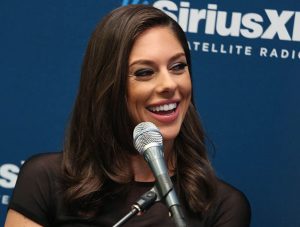 Weekend "Fox and Friends" co-host Abby Huntsman will leave the network after she hosts the show this weekend and is expected to land a role on ABC's "The View," according to an individual familiar with Huntsman's plans.

About two weeks after Sara Haines left "The View" to co-host the third hour of "Good Morning America" with Michael Strahan, a Fox News Channel spokesperson confirmed Huntsman is leaving the network, according to Deadline Hollywood.

A source familiar with the situation told Deadline that Huntsman is expected to land at The View, though no deal is done. Expect ABC News to announce shortly before the show’s new season starts, right after Labor Day holiday. The show’s annual eleventh-hour host-changeover announcement soap opera is among reasons the ABC News daytime talker remains a darling of the media.

The View had two vacant panelist chairs; Haines’ announcement followed by four days the news that three-year co-host Paula Faris is leaving the show, and her weekend GMA duties, for a new assignment that includes contributing to Good Morning America and a podcast on faith.

Huntsman, if she were to land the gig, would be the second conservative host on "The View" alongside Sen. John McCain’s (R., Ariz.) daughter Meghan McCain, who also formerly worked at Fox News and MSNBC.

The morning talk show has a long history of being slanted in favor of the liberal point-of-view. Tension over political disagreements is often high, such as a recent exchange in July that resulted in Whoopi Goldberg saying, "Fuck you" off-stage to a guest, Fox News host Jeanine Pirro.  Another liberal co-host, Joy Behar, recently mocked Vice President Mike Pence's Christian faith, calling it a "dangerous" form of "Mental illness."