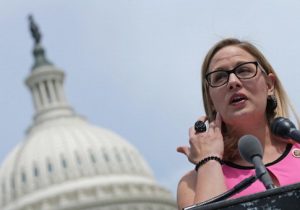 "On Saturday, July 27, 2002 the Jim Hightower Rolling Thunder Down Home Democracy Tour in Arizona gave a kick to the revolution Emma Goldman-style," Sinema wrote in an October 31, 2002, article for Independent Politics News. (The article is available on ProQuest.) "For 10 hours that day we talked, listened, debated, learned, taught, shared, formed coalitions, mobilized and moved. And during it all we ate, laughed, danced, sang, twirled, and just plain out had fun." She added, "Perhaps Emma Goldman's quote sums it up best, ‘If I can't dance, I don't want to be a part of the revolution.'" (A 1917 New York Times article described Goldman as one of the "two most notorious anarchists in the United States.")

Several thousand activists met in Tucson in late July 2002 for the Rolling Thunder Down Home Democracy Tour. "This tour, one of many ideas cooked up by Jim Hightower in that mysterious and elusive political conundrum that we call Texas," Sinema wrote, "is his answer to today's humdrum, predictable corporate-controlled political discussion."

Sinema listed some of the event's attendees, from "Food Not Bombs, Jobs with Justice, Women in Black, the Nuclear Resister, and Tucson Peace Center to the Arizona Advocacy Network, Arizona Citizen Action, and the Arizona Human Rights Fund—over 180 in all! Political parties and candidates also turned out in droves to talk progressive politics—Greens, Democrats, Communists, and Young Democratic Socialists alike."

Jim Hightower, a political activist and a primary organizer of the event, told gatherers their attendance was in defiance of President George W. Bush's "anti-democratic rule," according to the New Internationalist.

"We are gathered here in open defiance of the autocratic, plutocratic, anti-democratic rule of King George W, he and his corporate horde of Enroners and WorldComers, Halliburtons and Harken Energizers, downsizers and globalizers, who are trying to ride roughshod over us, our constitution and our democratic values," Hightower said.

We did not declare war against corporations. They declared it against us. Can we survive without the little darlings? Yes—with some inconvenience, of course. Can we survive if we let them continue on as they are? Clearly not. What do you do with a villain who trashes your world, threatens the peace and happiness of your town and family, sends your children off to selfish toil or political wars? You put his picture up in the Post Office and you go after him until this public enemy is caged.

Sinema also mentioned hearing a "rousing" speech from Tom Hayden, whom the New York Times described as "one of the nation’s most visible radicals" during the 1960s and early '70s. Although he opposed violent protests, he "backed militant demonstrations, like the occupation of Columbia University campus buildings by students and the burning of draft cards."

A recent profile delves into Sinema's upbringing and changing politics, observing that when she "began her rise in Arizona politics in the early 2000s, she was a Ralph Nader supporter and local spokeswoman for the Green Party who worked to repeal the death penalty and organized antiwar protests after the Sept. 11 attacks."

In 2003, Sinema told the Arizona Republic "that the real Saddam and Osama lovers were Ronald Reagan and George H.W. Bush." She is now part of the congressional Blue Dogs, "the most conservative group of House Democrats."

"What she's always been is not a centrist or a bold progressive but an opportunist," said Tomas Robles, an immigration activist.

While describing Sinema as "a solid progressive" on many issues, Lauren Kuby, a liberal city councilwoman from Tempe, Ariz., said "Kyrsten has always had her eyes on a larger electorate," acknowledging "the driver being ambition."

"She’s trying to scrub a 10-year record of radicalism on all aspects, and she doesn’t realize you can’t erase things you’ve said and done for the sake of running for office," said one Democratic Arizona lawmaker who has worked with Sinema. "For us [Democrats] it’s a very scary situation because we don’t want our reputation to be diminished by one ambitious politician. Many of us pro-Israel politicians don't want to see her win because it will diminish our positions on Israel."

Another Democratic insider in Arizona described Sinema's past deeds as "albatrosses hanging around her neck."

Soon after 9/11, Tablet reported, Sinema "co-founded Local to Global Justice, a local advocacy group. Its initial mission was to oppose the invasion of Afghanistan, but in 2007 it signed a petition calling for an end to U.S. aid to Israel and another in 2008 decrying Israeli ‘human rights violations against Palestinians in the Occupied Territories and against civilians in Lebanon.’"

She also helped organize the Arizona Alliance for Peaceful Justice. The group's motto, "military action is an inappropriate response to terrorism," was a position held by Sinema as well, according to The Hill.

"At least as late as 2010," Tablet notes, "she continued to associate with these groups, speaking, for example, at an antiwar rally several sponsored. She has since severed ties."

"These women who act like staying at home, leeching off their husbands or boyfriends, and just cashing the checks is some sort of feminism because they're choosing to live that life. … That's bullshit. I mean, what the fuck are we really talking about here?" Sinema said.