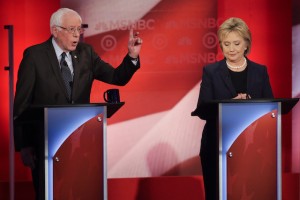 Hillary Clinton has substantial ground to make up with supporters of Sen. Bernie Sanders (I., Vt.) if she clinches the Democratic presidential nomination this fall.

25 percent of those backing Sanders report that they would not vote Clinton in the general election if the former secretary of state becomes the nominee, according to a McClatchy-Marist poll released early Wednesday. Only 69 percent said they would back her campaign.

Clinton supporters meanwhile are notably more willing to back her primary competitor if Sanders secures the Democratic nomination. Fourteen percent of those supporting Clinton said they would not back Sanders in the general election versus 79 percent who said they would support the Vermont senator.

The report was published just hours after Sanders defeated Clinton in the Wisconsin Democratic primary Tuesday night. The self-described Democratic socialist won 57 percent of the vote while Clinton lagged behind with 43 percent.

Nationally, the poll found Sanders slightly ahead of Clinton by 49 to 47 percent. The results reflect Clinton’s continued struggle to connect with young voters, according to McClatchy-Marist.

Independents, moderates, men, and whites are the most likely Sanders supporters to abandon Clinton in the general, according to the report.

Democrats, women, nonwhites, and individuals aged 18 to 44 are the most likely groups that would shift support to Clinton, the poll found.

The FBI’s ongoing probe into Clinton's private email server has continued to dog her bid for the presidency and polls have repeatedly found low numbers among those who believe she is honest and trustworthy.

Andrea Mitchell mentioned Clinton's struggle to build trust among Americans Wednesday morning, commenting during NBC's Today Show that Sanders is "hammering away" at her trustworthiness, creating a "real problem" for the former first lady moving forward.

The two will go head-to-head in New York April 19.