The Los Angeles County sheriff announced on Wednesday his office plans to increase the number of gun-carry permits issued to residents by 400 percent.

Sheriff Alex Villanueva (D.) said he would assign additional staff to process gun-carry permit applications in an effort to improve the sheriff department's operations. He said the new resources could quadruple approvals.

"I know another question some of you are going to ask about is the [gun-carry permit] policy," he said during a live stream. "We're increasing the approval rate on these and it's probably going to go up about 400 percent, roughly. So, if you think you have good cause please submit it, go through the process, and we've actually increased some of our staffing to accommodate that."

The number only sounds striking on paper. A 2017 audit by the California State Auditor found the county had only issued 197 permits and there were only 9 active permits belonging to applicants outside the law enforcement community, despite the county having a population of more than 10 million. Philadelphia County in Pennsylvania, which has a population of about 1.5 million and a "shall issue" gun-carry law, issued 9,239 permits in 2019.

The Los Angeles Sheriff's office did not respond to questions about why application processing is being sped up or how many gun-carry permits have been issued.

Brandon Combs, president of the California-based Firearms Policy Coalition, said he was not optimistic about the move, given the county's history.

"It's offensive that this corrupt, anti-gun rights sheriff thinks that’s adequate or a substantive improvement," he told the Free Beacon. "Los Angeles County should have tens to hundreds of thousands of licensees based on its population—400 percent of nearly nothing is still nearly nothing."

California is one of only nine states where local officials have discretion over whether an applicant has "good reason" to carry a gun on their person and can even deny applicants who have completed the required training and passed a background check. That's different from the 25 states where "shall issue" gun-carry laws, which require a permit to be given to those who have passed a background check and training, have been implemented; 16 states do not require a permit to carry a concealed gun. Villanueva said the process for obtaining a gun-carry license in Los Angeles County had not changed despite the new effort to streamline processing.

"Remember, ‘good cause' is not ‘shall issue,'" the sheriff said. "We're trying to make the system user friendly and if you're eligible to receive it because you've established a good cause we don't want to interfere with that process."

Gun-rights activists have long decried "good cause" laws as too restrictive and arbitrarily enforced—sometimes corruptly. A New York Police Department lieutenant was sentenced to 18 months in prison in 2019 for accepting bribes in exchange for gun-carry permits. An investigation by NBC Bay Area found gun-carry permit applicants who donated to the election campaigns of Santa Clara County, Calif., sheriff Laurie Smith (D.) were about 14 times more likely to be approved for a permit than those who had not donated. Combs said Villanueva's decision could produce similar results.

"It's probably just going to result in more perks for his political donors," Combs said. "Sheriff Flip-Flop should be run out of town and replaced by someone who respects the Constitution."

Other Second Amendment activists were more optimistic about the announcement. Alan Gottlieb, founder of the Second Amendment Foundation, said it was "a good first step" but added that the law should be changed to streamline the permitting process.

"If this results in more people being able to have the means of self-defense in Los Angeles County, that is a win for Second Amendment rights," Gottlieb told the Washington Free Beacon. "But what is really needed is to get rid of the California state law that is ‘may issue' and replace it with a ‘shall issue' one that recognizes the right to carry."

Some Struggle To Buy Guns as Coronavirus Shutdowns Linger 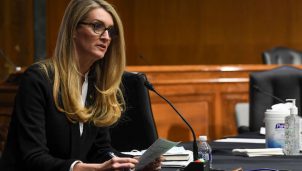 Woman Turns to Supreme Court to Get Her Guns Back