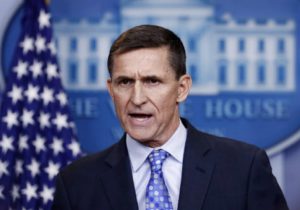 The White House has declined to turn over documents pertaining to the hiring and firing of President Trump's former national security adviser, Michael Flynn, that top lawmakers on the House Oversight and Government Reform Committee had requested.

Flynn resigned as national security adviser in February after it was revealed he had discussed U.S. sanctions on Russia with the Russian ambassador to the United States, Sergey Kislyak, before Trump took office and misled Vice President Mike Pence about the conversations.

Chaffetz and Cummings reviewed classified documents related to Flynn, including his application to renew his security clearance, and announced their findings on Tuesday in a press conference on Capitol Hill.

The lawmakers said it appears Flynn did not comply with federal law by not fully disclosing his business dealings with and payments from Russia while seeking a security clearance to serve in the next administration. Flynn received more than $45,000 for a speech he gave to RT-TV in Russia.

"I see no data to support the notion that Gen. Flynn complied with the law," Chaffetz said, referring to the speech and whether he disclosed the payment or received permission from the Pentagon or State Department.

"As a former military officer, you simply cannot take money from Russia, Turkey, or anybody else," he added. "And it appears as if he did take that money. It was inappropriate, and there are repercussions for a violation of law."

"We cannot discuss the contents of the documents that we just saw because they are indeed classified, but we can say this, they are extremely troubling," Cummings said.

Flynn has also come under fire in recent months for his lobbying work to represent Turkish interests, which was reportedly linked to the retired general's ties to Russia.

The former national security adviser has not been accused of committing any crimes.

The White House explained to the the House Oversight Committee in a letter why it would not provide further requested documents on Flynn, CNN reported.

White House Director of Legislative Affairs Marc Short outlined in a letter to the House Oversight Committee how it would not complete the request from the panel, referring some requests to the Department of Defense, saying the office doesn't have custody of some of the other documents or simply stating "we are unable to accommodate" others.

A White House aide disputed that the White House was withholding anything from the committee, saying they could not provide documents they do not have access to. The aide said that they directed oversight investigators to the appropriate agencies.

The Oversight Committee met on Tuesday morning to review classified material provided by the Department of Defense in response to a March 22 request for more information on Flynn. The panel is seeking further documents from the White House and intelligence community.

Since resigning as Trump's national security adviser, Flynn has retained a lawyer and offered to testify on the ongoing federal probes into alleged ties between the Trump campaign and Russia in exchange for immunity.

Flynn's lawyer, Robert Kelner, said Tuesday that his client is not hiding any wrongdoing.

"As has previously been reported, Gen. Flynn briefed the Defense Intelligence Agency, a component agency of DoD, extensively regarding the RT speaking event trip both before and after the trip, and he answered any questions that were posed by DIA concerning the trip during those briefings," Kelner told CNN.