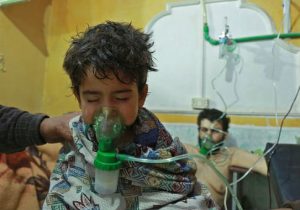 The Organization for the Prohibition of Chemical Weapons (OPCW), an intergovernmental body that implements the Chemical Weapons Convention, determined sarin and chlorine were "very likely" used in the Syrian village of Ltamenah in March 2017.

The organization did not state which government or entity employed the weapons, according to BBC News and CBS News.

On 25 March, at approximately 1 p.m., a Syrian air force helicopter dropped a barrel bomb on Al-Latamneh hospital, killing three civilian men — a surgeon and two patients — and injuring a number of staff and patients. Photos of remnants provided to the Commission depict an improvised chlorine bomb. Eyewitnesses heard the bomb make only a slight noise before releasing a yellow/greenish smoke that smelled strongly of cleaning agents. The use of chlorine is further corroborated by symptoms reported: at least 32 persons were injured as a result of the attack, most of them suffering from irritated throats and eyes, difficulties breathing, vomiting and frothing of the mouth.

The same report notes that five days later, on March 30, "an unidentified warplane dropped two bombs in an agricultural field south of Al-Latamneh village." Although the report did not conclude at the time that sarin was used, it observed that "interviewees described certain symptoms, including a very low pulse in one case, and contracted pupils, suffocation, nausea and spasms in another, that indicate poisoning by a phosphor-organic chemical, such as a pesticide or a nerve agent."

The Obama administration claimed it had ensured Syria’s chemical weapons were removed. Obama's secretary of state at the time, John Kerry, said the U.S. and Syria "struck a deal where we got a hundred percent of the chemical weapons out." Despite reports of chemical weapons usage by Syria, former White House Press Secretary Josh Earnest told MSNBC that "Bashar al-Assad doesn't have a declared chemical weapon stockpile."