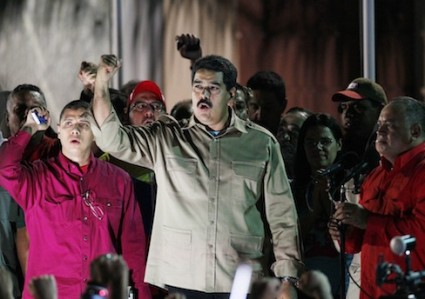 Venezuela President Nicolas Maduro has introduced a new food card that critics decry as a Cuban-style rationing policy that will not alleviate the country’s economic problems, Reuters reports.

Maduro has touted the "Secure Food Supply" card as a measure that will combat hoarding and reselling by Venezuelans. Some shoppers buy heavily subsidized food products and then resell them on the black market or over the border in Colombia for large profits:

"If there are shortages, there needs to be rationing to make sure we can all get the products we need," said doctor Yusmery Palacios, 36, in a line at a state-run supermarket in Caracas.

"It's a measure that will help us. A lot of people buy here to resell for more," she said. Others in the queue agreed.

Hardline opposition sympathizers, though, decry the card as a copy of Cuba's ration books – a depressing sign of economic hardship and what they call "Castro-communist" influence in Venezuela.

"No to the Cuban package!" said one opposition leader, Maria Corina Machado, who frequently depicts the Maduro government as being under the influence of Cuban President Raul Castro.

Critics say the card fails to tackle the roots of shortages in Venezuela: a lack of hard currency for imports, dysfunctional ports and absurdly low prices for subsidized goods.

About 40 people have died in protests against Maduro’s rule. Student protesters and opposition leaders say they are fed up with Venezuela’s rampant crime, inflation, and shortages of basic goods.

Cuba’s communist government has been accused of advising Venezuela’s military and security forces on tactics for repressing protesters.