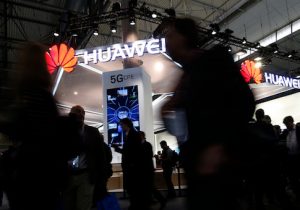 One of the USDA-backed companies, Pine Telephone Company, maintains a service area in southeastern Oklahoma that encompasses the McAlester Army Ammunition Plant, potentially enabling Huawei to completely surround the Pentagon's chief provider of bombs, missiles, and ammunition for the U.S. armed forces.

Pine Telephone Company also manages a service tower that is located less than 100 miles away from the active duty Tinker Air Force base.

Though it is unclear whether the USDA grants were used directly to purchase the Huawei equipment, the agency does not bar carriers from drawing on a multi-million dollar government fund that helps expand broadband to rural areas to buy equipment from companies deemed to pose a national security risk.

AT&T, Verizon, and other large carriers have avoided Huawei amid pressure from lawmakers and intelligence officials who warn that Beijing could use its equipment to conduct espionage or carryout cyber attacks given its close links to the ruling Chinese Communist Party—a charge the company denies.

But many small or rural carriers have turned to Huawei for what they say are cheaper prices and better customer services than competitors.

Last month, Federal Communications Commission Chairman Ajit Pai proposed a rule that would make this collaboration more difficult, preventing rural carriers from using federal funds to buy equipment from any company posing a threat to the United States or its communications networks. The FCC directly named Huawei and smaller Chinese rival ZTE in a separate statement on the proposal.

A USDA spokesperson did not respond to a request for comment on whether the agency was considering a similar rule.

The FCC action was taken in response to a congressional inquiry led by Sens. Tom Cotton (R., Ark.) and Marco Rubio (R., Fla.), who introduced legislation to block the U.S. government from buying or leasing gear from Huawei or ZTE.

"Chinese telecoms companies pose a real and growing threat to our national security and to Americans' privacy," Cotton said in a statement to the Washington Free Beacon. "We've been subsidizing them for far too long and I'm committed to cutting off their access to taxpayer dollars—whether through the FCC, USDA, or any other federal agency."

Reps. Liz Cheney (R., Wyo.) and Mike Conaway (R., Texas) introduced a similar bill in the House in January. Both have expressed concern over the Chinese government potentially using companies like Huawei to exploit U.S. communications networks, including military bases.

"The presence of these companies anywhere near U.S. military installations is deeply troubling," Conaway told the Free Beacon, noting that he's "exploring other options to keep our military protected from prying Chinese eyes."

Though Congress has banned the Pentagon from buying equipment from Huawei or ZTE, it is unclear whether small carriers using Chinese telecoms gear provide network service to U.S. military bases.