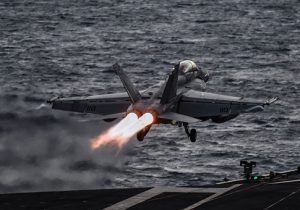 The Department of Defense announced on Friday that a U.S.-led coalition completed 66 strikes against the Islamic State between May 11-17.

Combined Joint Task Force Operation Inherent Resolve and its partners stuck ISIS caves, campsites, training camps, bomb factories, and other targets in Iraq during five of the past seven days. No strikes were carried out in Iraq on Sunday or Thursday.

In Syria – where despite the coalition's progress, ISIS has been able to gain a foothold in parts of the country – strikes occurred every day of the week. Forces targeted and destroyed an ISIS command-and-control center, several vehicles, weapons storage facilities, supply routes, bomb factories, communications buildings, and several fighting positions.

The destruction of ISIS targets in Iraq and Syria limits the group's ability to project terror and conduct external operations throughout the region and the rest of the world, task force officials noted.

U.S. aircraft worked with the air assets of several other countries in the joint effort to "destroy ISIS in Iraq and Syria." The strikes may also have been carried out by rocket-propelled artillery or ground-based tactical artillery.

The coalition defines a strike as "one or more kinetic engagements that occur in roughly the same geographic location to produce a single or cumulative effect."

For example, task force officials explained, a single aircraft delivering a single weapon against a lone ISIS vehicle is one strike, but so is multiple aircraft delivering dozens of weapons against a group of ISIS-held buildings and weapon systems in a compound, having the cumulative effect of making that facility harder or impossible to use. Strike assessments are based on initial reports and may be refined, officials said.

The task force does not report the number or type of aircraft employed in a strike, the number of munitions dropped in each strike, or the number of individual munition impact points against a target.

While officials have noted work still remains in the fight to destroy ISIS, the terrorist group has lost significant ground in Iraq and Syria. The push against ISIS has resulted in the restoration of freedom of religion and renewed construction in the region. As a result, there are "encouraging signs" life is returning to normal for civilians in Iraq and Syria, according to a JTF spokesman last month.