ISIS-backed terrorists attempted at least 73 attacks on U.S. soil since 2017

The United States has emerged as the terror group ISIS's top target, with 30 percent of the group's recent plots centering on America, including 33 terror attempts in just the first part of 2018, according to a new congressional report.

ISIS-backed terrorists have attempted to launch at least 73 attacks on the American homeland since 2017, according to a comprehensive report released Friday by the House Homeland Security Committee.

There is no sign ISIS terror plots are on the decline, according to the report, which found a 63 percent increase in ISIS terrorism during the past two years.

The plots include those organized by at least 22 teenagers, as well as refugees and asylum seekers, a statistic that could provide the Trump administration further ammunition as it seeks to limit the number of refugees permitted into America from Middle East hotspots. 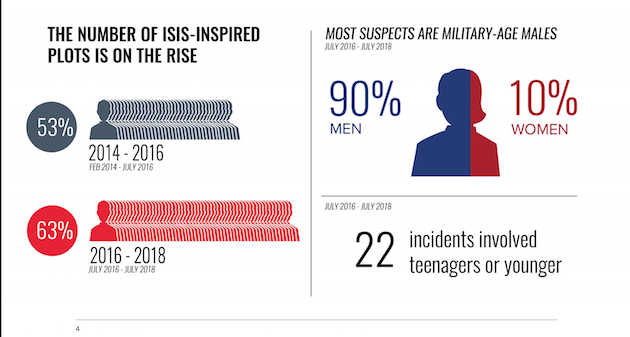 ISIS leader Abu Bakr al-Baghdadi, after a period of silence, has appeared back on the grid encouraging followers to strike America and its allies.

Baghdadi, in a recent speech reviewed by the committee, "not only offered definitive proof he is still alive—citing recent tensions between the United States and Turkey—he downplayed ISIS' territorial losses and emphasized the importance of homeland attacks in the West to the overall strategy and long-term success of ISIS."

"Carry out an attack that breaks their heart, and rip them apart, either with gunfire, or a stab to their bodies, or a bombing in their countries, for this is equal to a thousand operations here," Baghdadi was quoted as saying in an August 2018 speech marking his return to the public forefront. "Do not forget about running people over on the roads. Ignite your fight, so that Crusaders will feel its flames."

As the Trump administration targets ISIS in Iraq, Syria, and other countries—devastating the group and wrenching from it control of key territories—ISIS has shown that it can still organize terror attacks abroad, particularly in the United States and European nations.

"Since the summer of 2014, when the Islamic State declared its self-proclaimed caliphate and Baghdadi appeared at the al-Nuri mosque in Mosul, Iraq, to declare himself the 'Caliph Ibrahim,' ISIS has lost nearly 98 percent of the territory it controlled in Iraq and Syria," the report noted.

"That compares to 101 ISIS-linked incidents reported in House Homeland's 'Terror Gone Viral' report released in 2016," according to the report. "Cumulatively, over the 2014 to 2018 period covered by the Terror Gone Viral reports, ISIS has been linked to 243 incidences, averaging five terrorist incidents per month."

The report's findings show "that despite ISIS' battlefield losses, the group remains a potent threat in large part due to the viral success of its online propaganda and 'how to' efforts," the report warns.