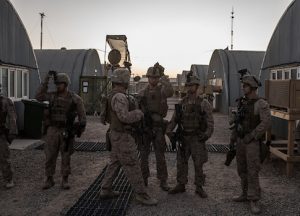 Al Qaeda is operating "across" Afghanistan in several regions, according to Gen. Austin Scott Miller, the commander of U.S. and NATO forces in Afghanistan.

The Long War Journal, a project of the Foundation for Defense of Democracies, has tracked al Qaeda's presence in Afghanistan for more than a decade, creating maps that show the terrorist group's operations and movement in the country. Al Qaeda and its regional branch, al Qaeda in the Indian Subcontinent, are present in 13 Afghan provinces, according to one of the maps.

"The data clearly shows that al Qaeda and allied terrorist groups have been operating on Afghan soil for the past two decades with the approval of the Taliban," the Journal reported. "These terrorist organizations often operate in areas controlled by the Taliban—and the jihadists killed in coalition or Afghan raids often die alongside members of the Afghan Taliban."

The Journal also noted that, since 2007, Afghan, NATO, and American forces have launched at least 373 operations against these terrorist groups in 27 of Afghanistan's 34 provinces.

Miller's latest comments could prove problematic for ongoing peace talks between the United States and the Taliban. Zalmay Khalilzad, the U.S. special representative for Afghanistan reconciliation, is leading negotiations for Washington. In January, after meeting with Taliban representatives in Qatar for several days, Khalilzad said the Taliban "have committed, to our satisfaction, to do what is necessary that would prevent Afghanistan from ever becoming a platform for international terrorist groups or individuals." He then added: "We felt enough confidence that we said we need to get this fleshed out, and details need to be worked out."

In July 2016, Khalilzad testified to the House Foreign Affairs Committee that the Taliban is an "extremist organization," and that the group would not sever ties to al Qaeda.

"The Taliban is clearly supporting al Qaeda to this day, because al Qaeda would not be able to operate ‘across the country' without the explicit support and approval of the Taliban," wrote Bill Roggio, editor of the Long War Journal and a senior fellow at the Foundation for Defense of Democracies.