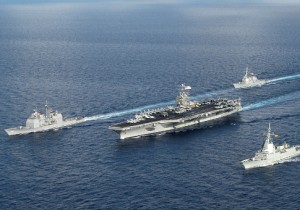 The former undersecretary of the Navy said Wednesday that President Donald Trump's proposal to increase the defense budget by $54 billion next year will not provide the service with enough money to meet the president's goal of expanding the Navy's fleet to 350 ships.

Janine Davidson, who has nearly 30 years of experience in military operations, said the Trump administration's proposed 10 percent spike in defense spending for fiscal year 2018 will not solve the Navy's readiness challenges, in large part because the current fleet is very outdated.

"We have a very long way to go. We have an enormous readiness problem in the Navy … that I think is going to be a lot harder to get out of than people realize," Davidson said during an event at the conservative Hudson Institute in Washington, D.C. "While people are focused on building more, we have to at the same time be operating the Navy that we have."

On the campaign trail, Trump echoed calls from Republican lawmakers and military experts to expand the Navy's fleet from 274 ships to 350, which would mark the largest naval buildup since the Reagan administration. The proposal is just shy of the 355 ships requested by the Navy in December, and surpasses the service's earlier goal of 308 ships.

Expanding the Navy to 350 ships would cost an estimated $25 billion a year over the next 30 years, or 60 percent above the historical average amount allocated for shipbuilding, the nonpartisan Congressional Budget Office projected in a January report.

The plan's implementation is likely to face challenges given defense spending caps set by the 2011 Budget Control Act, which is scheduled to remain in effect through 2021. Congressional Republicans can repeal the bill, but divisions within the party about how to reduce the deficit will likely complicate the process.

Davidson said costs to rebuild and expand the naval fleet have drastically increased because of sequestration and the failure to invest over time in sustainment programs.

Bryan Clark, a senior fellow at the Center for Strategic and Budgetary Assessments, said the United States's overuse of its shrinking Navy has caused serious backlogs in needed maintenance.

For the past two decades, the United States has deployed 100 ships continuously at sea, despite a smaller fleet. As a result, the Navy has been forced to deploy ships more frequently and for longer periods of time.

"The reason we've been unable to do the maintenance is because everybody's out there getting deployed," Clark said at the Hudson Institute. "We need to keep ships in port, we need to get the F-18s back into the depots."

The administration has not yet detailed what types of ships would be added to the fleet in the proposed expansion. Clark said the Navy has requested additional submarines, surface ships, and amphibious ships.

Trump is expected to submit a budget blueprint to Congress on March 13.