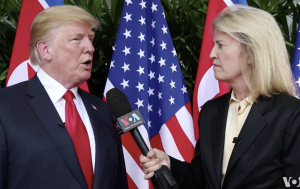 President Donald Trump effusively praised North Korean dictator Kim Jong Un in an interview with Voice of America airing Tuesday, saying Kim "loves his people" and "has a great feeling for them."

Trump met face-to-face with Kim in a historic summit in Singapore Tuesday, as the two men who had traded belligerent threats over the past year shook hands and posed for pictures. They later emerged with a signed agreement to seek full denuclearization of the Korean peninsula that was light on details.

Speaking with former Fox News host Greta Van Susteren, Trump spoke warmly of Kim, the leader of one of the nation's most repressive regimes presiding over abysmal human rights conditions. Trump told her they were going to "denuke North Korea" and that Kim was "funny," had a "great personality" and was a "great negotiator."

"I think he liked me and I like him," Trump said. "And I understand the past and, you know, nobody has to tell me, he’s a rough guy. He has to be a rough guy or he has been a rough person. But we got along very well. He’s smart, loves his people, he loves his country. He wants a lot of good things, and that’s why he’s doing this."

Van Susteren noted Kim has starved and brutalized his people.

"Look, he’s doing what he’s seen done, if you look at it. But, I really have to go by today and by yesterday and by a couple of weeks ago because that’s really when this whole thing started," Trump said.

Asked why he was confident North Korea wanted to make a nuclear deal, Trump said Kim "knows that we mean business." The Trump administration has pointed to tough sanctions against North Korea as helping get the rogue regime to the negotiating table, and Trump said the sanctions would remain on until it started dismantling its nuclear weapons.

Van Susteren asked Trump what he wanted to say to North Korea's people, and he again heaped praise upon Kim.

"I think you have somebody that has a great feeling for them," he said. "He wants to do right by them and we got along really well. We had a great chemistry—you understand how I feel about chemistry. It’s very important. I mean, I know people where there is no chemistry. No matter what you, do you just don’t have it. We had it right from the beginning, I talked about that, and I think great things are going to happen for North Korea."