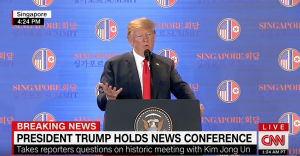 President Donald Trump announced Tuesday that the United States will stop joint military exercises with South Korea as part of the agreement coming out of the U.S.-North Korea summit.

"We will stop the war games, which will save us a tremendous amount of money," Trump said during a press conference. "Unless and until we see the future negotiations is not going along like it should."

The announcement appeared to catch South Korea by surprise.

"Plus. I think it's very provocative," Trump said.

During the summit in Singapore, Trump became the first U.S. president to meet face-to-face with the leader of North Korea. The Trump administration has pushed for North Korea to denuclearize, while promising security and prosperity in return. The joint statement that both Trump and North Korean dictator Kim Jong Un signed gave few details on how the two countries will move forward with denuclearization of the peninsula.

"President Trump committed to provide security guarantees to the DPRK and Chairman Kim Jong Un reaffirmed his firm and unwavering commitment to complete denuclearization of the Korean Peninsula," the statement said.

A reporter asked Trump what assurances he would be willing to give North Korea and if they include reducing the U.S. military presence in the region.

"Can you be specific of the assurances you are willing to give to Kim Jong Un? Does that include reducing military operations?" the reporter asked.

"That's not part of the equation right now. At some point, I hope it would be," Trump added.