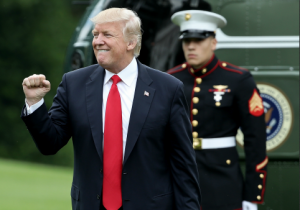 President Donald Trump announced Thursday his meeting with North Korean dictator Kim Jong Un will take place on June 12 in Singapore, saying they would try to make it a "very special moment for World Peace."

"The highly anticipated meeting between Kim Jong Un and myself will take place in Singapore on June 12th. We will both try to make it a very special moment for World Peace!" Trump tweeted.

The potential meeting is the latest in a series of remarkable developments in the relationship between the two longtime adversaries. Over the course of 2017, Trump and Kim traded threats. At one point, Trump dubbed Kim "Rocket Man" and said North Korea would be totally destroyed if the regime ever made good on its belligerent nuclear rhetoric against the United States.

The Trump administration has led on enacting tough international sanctions against North Korea, which in addition to its rogue nuclear program has a horrific human rights record.

Kim met with South Korean President Moon Jae In last month in another historic summit, and the South Korean government said Kim stated he would end North Korea's nuclear program in return for a U.S. promise not to invade the country and formal end to the Korean War.

Trump has said he desires full denuclearization of the Korean peninsula, which to him means "they get rid of their nukes."

Trump's announcement comes on the heels of his early-morning greeting of three American prisoners freed by North Korea. The men were detained on what the U.S. called baseless charges, and Secretary of State Mike Pompeo worked to secure their release ahead of the Trump-Kim summit.

"We're starting off on a new footing," Trump said of the prisoner release. This is a wonderful thing that he released the folks early … Very important to me. I really think we have a very good chance of doing something very meaningful."