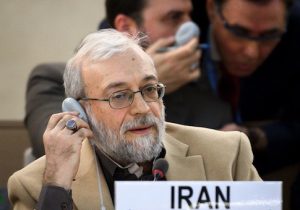 The Trump State Department said Tuesday it is taking a top Iranian official's explanation of events linked to the travel of the 9/11 terrorist attackers as an admission of guilt in facilitating the terrorist attacks on the World Trade Center in New York City, according to comments provided to the Washington Free Beacon.

Iranian officials admitted last week in a groundbreaking interview that their government helped obfuscate and cover the tracks of al Qaeda militants who eventually went on to carry out the 9/11 attacks.

An Iranian official, in a Farsi language interview translated and published last week by Al Arabiya, admitted Iran aided the 9/11 terrorist attacks in the United States by aiding the free travel of al Qaeda operatives who went on to fly commercial airliners into the Twin Towers, according the translation attributed a senior Iranian official.

Mohammad-Javad Larijani, an international affairs assistant in the Iran's judiciary, disclosed in Farsi-language remarks broadcast on Iran's state-controlled television that Iranian intelligence officials secretly helped provide the al Qaeda attackers with passage and gave them refuge in the Islamic Republic, according to Al Arabiya.

"Our government agreed not to stamp the passports of some of them because they were on transit flights for two hours, and they were resuming their flights without having their passports stamped. However their movements were under the complete supervision of the Iranian intelligence," Larijani was quoted as saying.

After initial reports swept across social media, Iranian officials representing the country's interests at the United Nations have attempted to recharacterize Larijani's remarks and said that translations were manipulated by al Arabiya, according to communications viewed by the Free Beacon.

The remarks represent the first time senior Iranian officials have publicly admitted to aiding al Qaeda and playing a direct role in facilitating the 9/11 attacks.

The State Department, in remarks provided to the Free Beacon, said the statement represents an admission of what the United States government has long maintained—that Iran aided the al Qaeda attackers and facilitated their passage through the Middle East.

"We understand an Iranian official affirmed what was previously documented in the 9/11 Commission Report—that Iranian officials helped conceal the travel of al Qaeda members through Iran, on their way to and from countries in the region, including by not placing Iranian stamps in their passports," a senior State Department official told the Free Beacon.

"These actions once again confirm the egregious nature of the Iranian regime and are further evidence of the regime's malign role in the world," the official said.

The Trump administration is working on multiple fronts to counter Iran's support for terrorism and will not hesitate to amp up pressure on the regime, the official said.

"The administration is determined to counter Iran's destabilizing behavior and will increase our pressure on the regime to change its behavior," the official said.

While Iranian officials have moved to downplay the comments and create separation between the Islamic Republic and al Qeada, the Trump administration's position represents an indictment of the Iranian government's role in aiding the 9/11 attackers and could complicate new discussions regarding the future of the landmark nuclear deal, which Trump walked away from.