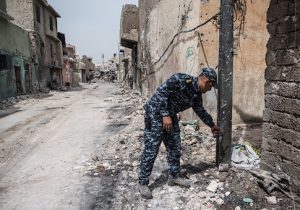 The State Department's bureau of political-military affairs continues to direct tens of millions of dollars to a nonprofit that paid a $2 million-dollar fine and admitted to providing "material support" to Iran, Hamas, and other groups the U.S. considers terrorists or terrorist-linked.

The lucrative contracts for IED and other bomb removal continued despite the Trump administration's tougher policies on Iran and pledge to undertake a maximum diplomatic and financial pressure campaign against Iran and terrorist groups linked to it.

The Norwegian People's Aid, or NPA, an Oslo-based humanitarian non-profit strongly affiliated with labor unions, has at least a six-year history of working for the U.S. Agency for International Development and more recently for the State Department for demining and other bomb-removal efforts around the world.

In April, NPA settled a civil suit with the Justice Department, agreeing to pay a fine of $2 million for failing to disclose its work in Iran—and other work involving other U.S.-banned entities—in a grant application for USAID work in Sudan.

In the settlement, the group admitted that it had violated U.S. federal funding requirements by failing to disclose in grant applications that it performed demining work in Iran and had funded numerous workshops attended by young people in the Gaza Strip that included senior officials of partner political parties as part of a youth leadership project, including Hamas, the Popular Front for the Liberation of Palestine, or PFLP, and the Democratic Front for the Liberation of Palestine.

Hamas, PFLP, and DFLP appear on the U.S. Office of Foreign Assets Control's specially designated nationals and blocked persons list. The PFLP and DFLP are known for their terrorist attacks on civilians, including airline hijackings and suicide bombings against Israeli citizens and others from western countries.

The Manhattan U.S. Attorney's office found that the NPA from 2001 to 2008 performed mine-clearance activities in Iran that were "integral to an Iranian [oil] development project" and trained members of the Iranian Army on how to conduct mine clearance activities as well as accompanied and advised members of the Iranian Army while they completed the work in oil-rich areas.

"After the settlement, U.S. Attorney Geoffrey Berman said the NPA for years had obtained grant money from USAID by falsely representing that it had not provided and would take reasonable steps to ensure that it did not knowingly provide, material support to prohibited parties under U.S. law."

Despite the settlement, the State Department's political-military affairs office has continued to fund NPA's humanitarian and demining work.

NPA is listed on a State Department release dated Nov. 20 as one of eight companies and organizations State is funding to clear IEDs and other bombs left behind in Iraq by the Islamic State.

The bureau of political-military affairs this fall doled out another $4.7 million to NPA for IED and other weapons removal in Iraq for an 18-month grant that was set to begin in October, according to USAspending.gov, a database of all U.S. government contracts and grants. The grant is focused on new IED removal work in Anbar province, sources told the Washington Free Beacon.

The State Department's bureau of political-military affairs said it has spent $176 million on all of its landmines and IED clearance efforts in Iraq since fiscal year 2015 but did not provide a breakdown of how much each organization received for its work.

After the settlement this year, the State Department also awarded NPA $3.5 million as part of a separate, ongoing $8.5 million grant for IED removal in other areas of Iraq that began in the fall of 2016, according to USAspending.gov.

The NPA is using U.S. taxpayer funds for its IED and weapons removal programs in numerous countries across the globe. After the April settlement, for the remainder of this year alone, the State Department provided a total of $24 million to NPA for weapons removal work in Afghanistan, Cambodia, Iraq, Kosovo, Palau, Laos, Vietnam, and Zimbabwe.

Behnam Ben Taleblu, an Iran specialist and research fellow at the Foundation for Defense of Democracies, said he's encouraged that the Justice Department brought the lawsuit and NPA paid the $2 million fine.

However, he said continuing to fund NPA's work when there are other companies and nonprofits equally qualified and available to do it sends the wrong signal "about U.S. resolve to punish those who have previously done business with Iran."

"Out of all the elements of the administration's pressure policy on Iran, the regional dimension is the one that needs the most work," he said. "It's therefore hard to make a case for maximum pressure on Iran if Washington stands by entities now slated to work in Iraq that have previously misled U.S. agencies on their activities in Iran."

"Now is the time for creative U.S. diplomacy to help wean Iraq off of Iran. By relying on entities that have worked with Iran, Washington risks undercutting its own message," he said.

Demining work is usually critically important for civilian populations living around known minefields, but in the case of NPA’s work inside Iran, it appears to be driven by Tehran’s desire for oil exploration, he said.

"This represents the triumph of profit motive over humanitarian considerations," he said.

A State Department spokesperson said it's aware that NPA settled with the DOJ and paid the $2 million fine and stressed that that the work that prompted the U.S. government lawsuit was unrelated to demining programs funded through the Office of Weapons Removal and Abatement in the State Department’s Bureau of Political-Military Affairs.

The spokesperson said the office continued to fund NPA because it remained "an eligible NGO" and said the nonprofit operates at a "fraction of the cost of other operators" but did not specify which "operators" they were considering in that comparison.

"As a general matter of course, we make it explicitly clear to implementing organizations that grant funding be firewalled from any of their work that may include/touch on entities that are prohibited from receiving [U.S. government] assistance funds," the spokesperson said.

"NPA grants with the Department were separate and at all times in full compliance with relevant regulations," the spokesperson said.

"NPA provides an excellent return on investment for the American taxpayer in Iraq, clearing very dangerous devices in very dangerous areas with a clean safety record, all at a fraction of the cost of other operators."

NPA spokesman Hakon Odegaard said his organization's work in Iran was performed under a commercial contract paid and ordered by a state-owned Norwegian oil company. He said his organization "has a long record of conducting life-saving humanitarian operations in more than 40 states and territories around the world since 1992 and were already operational in Anbar at the time of the award."

Although there are several equally large or larger for-profit companies who perform this type of work for the U.S. government, Odegaard said his organization is one of the largest non-profits conducting mine-clearance and other weapons removal operations worldwide and is recognized as a "world leader" in this field.

The Trump administration in early November reimposed the last batch of sanctions that had been lifted as part of the 2015 nuclear deal with Iran.

In May, President Trump announced he was withdrawing from the Obama-era nuclear accord between the United States, the United Kingdom, Germany, France, Russia, and China. The deal gave Tehran billions of dollars in sanctions relief in exchange for rolling back parts of Iran's nuclear program.

In late July, Secretary of State Mike Pompeo delivered a major speech on Iran in which he pledged that the United States would undertake a "diplomatic and financial pressure campaign to cut off the funds that the regime uses to enrich itself and support death and destruction."

"We have an obligation to put maximum pressure on the regime's ability to generate and move money, and we will do so," he said in remarks at the Ronald Reagan Presidential Foundation and Library.

The Israeli government in May called on the European Union to cut funding to NPA, as well as several other non-profits that it argued support the anti-Israel Boycott, Divestment, and Sanctions movement aimed at isolating Israel over its policies toward Palestinians.

The NPA has tried to push back against what it called an "aggressive and coordinated campaign" against it by Israel. In a lengthy statement posted on its website earlier this year, the group says it is not its policy to work for a boycott of an individual state.

"Nonetheless it is a matter of concern that organizations that support a boycott of Israel are criminalized and refused access to Israel and Palestine," the group said. "This is a violation of the fundamental rights of free speech and association."

Explaining its settlement with the Justice Department, NPA said the origin of the settlement dates back to a contract with USAID in 2012 for work in South Sudan and its failure to disclose its demining work with Iran and its youth leadership project in the Gaza Strip. The group said the failure to disclose was a mistake because its officials thought the U.S. disclosure rule applied only to activities funded by U.S. funds and not activities funded by other donors.

Funding from USAID and other U.S. agencies requires that organizations submit an annual certification declaring no relation over the last 10 years to countries or organizations under sanction by the U.S. government.

"Although we have disagreed on the fairness of the claim, NPA had accepted paying the settlement to reach closure. Due to the estimated costs, resources and time necessary to take this case to trial, we have concluded that the best decision for us is to agree on the settlement. In this way we can focus on our mission of making the world a safer and more just place," said Henriette Westhrin, NPA's secretary general.

"We will do our best to ensure that this does not affect the good, long-term relationship we have with our much-appreciated U.S. donors," she added.

This article was updated to include comment from the NPA spokesman and State Department spokesman.