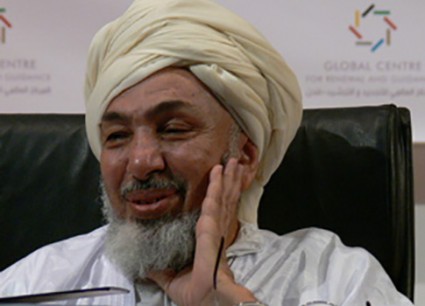 The Department of State has again promoted the work of a controversial Muslim scholar who has endorsed a fatwa calling for the murder of U.S. soldiers in Iraq, according to a series of tweets sent out by an official Twitter account that is tasked with combatting extremist ideologies.

In a series of five separate tweets on Wednesday, the State Department’s Think Again, Turn Away account, which works to combat radical Islam, promoted a recent NPR discussion with Sheikh Abdallah Bin Bayyah, a one-time vice president of the International Union of Muslim Scholars, an organization founded by a Muslim Brotherhood leader "who has called for the death of Jews and Americans and himself is banned from visiting the U.S.," according to reports.

Bin Bayyah is reported to have been one of multiple clerics who backed a 2004 fatwa, or religious decree, endorsing violent resistance against American soldiers fighting in Iraq.

The State Department was forced to apologize and delete a series of tweets from its Counter Terrorism (CT) Bureau in 2014, after the Washington Free Beacon reported on its promotion at the time of Bin Bayyah.

The NPR interview promoted by the State Department features a panel discussion with Bin Bayyah and others who discuss ways in which Muslim clerics might combat the Islamic State’s (IS, also known as ISIS or ISIL) religious fanaticism.

Yet Bin Bayyah himself has often been associated with the promotion of controversial causes.

In addition to backing the fatwa calling for the killing of U.S. troops, the cleric has "urged the U.N. to criminalize blasphemy" and has spoken "out in favor of Hamas," the radical terrorism organization committed to Israel’s destruction, according to reports.

Bin Bayyah also issued a fatwa in 2009  "barring ‘all forms of normalization’ with Israel," according to a Fox News report.

During a 2010 interview on the Al Jazeera network, Bin Bayyah appeared to endorse Palestinian violence.

A 2011 statement posted on the cleric’s website condemns the United States and other nations for designating Hamas and Palestinian Islamic Jihad as terrorist organizations.

The Obama administration also faced criticism in June 2013 for holding a meeting with Bin Bayyah at the White House.

The cleric held meetings with members of Obama’s National Security Council (NSC) at the White House to discuss poverty and global health efforts, according to multiple reports published at the time.

Obama himself came under fire last year when he praised Bin Bayyah during a speech before the United Nations. The president described the cleric as a moderate leader who can aid the United States in the fight against IS.

When the State Department came under fire for promoting Bin Bayyah last year, officials at the CT Bureau immediately apologized.

"This should not have been tweeted and has since been deleted," the CT Bureau tweeted at users who expressed anger over the original message.

"It was wrong and should not have been tweeted," the bureau later tweeted in response to others who had expressed concern.

The State Department did not immediately respond to a request for comment on the recent tweets.

"This is yet another episode of the Obama administration’s bizarre fetish to hail any Islamic scholar or group who expresses even the slightest degree of variance from ISIS as moderate," said Patrick Poole, a terrorism analyst who has reported about Bin Bayyah’s controversial past.

"Ignore for just a minute that the State Department had to apologize for very good reason just last year for tweeting out a link to Bin Bayyah’s writings, and just take a look at his record," Poole said. "This is how the administration believes it is going to defeat ISIS? And is there really no other Islamic scholar on the planet that the administration can promote apart from Abdullah Bin Bayyah? It’s no wonder we’re losing the War on Terror."