A Russian sailor appeared to give away his ship's position in the Mediterranean Sea by taking selfies while on deck.

The sailor, aboard the nuclear-powered battle cruiser Pyotr Velikiy, took the pictures outside on the ship, giving away the vessel's position off of the East coast of Crete, the Daily Caller News Foundation reported over the weekend.

The ship is part of a fleet that will likely be part of Russian operations in Syria against rebels trying to overthrow the regime of President Bashar al-Assad. Russia has launched air strikes in recent months against the rebel-held city of Aleppo to work with Syrian and Iranian forces to take the besieged area. Moscow and Damascus have been criticized for bombing indiscriminately and killing many civilians.

The Pyotr Velikiy reportedly carries cruise missiles similar to those used in Syria against rebels in the past, the Daily Caller News Foundation noted.

Journalist Hans de Vreij reported the sailor's selfie and location of the fleet via Twitter over the weekend.

It is unclear whether the sailor will be disciplined for his actions. 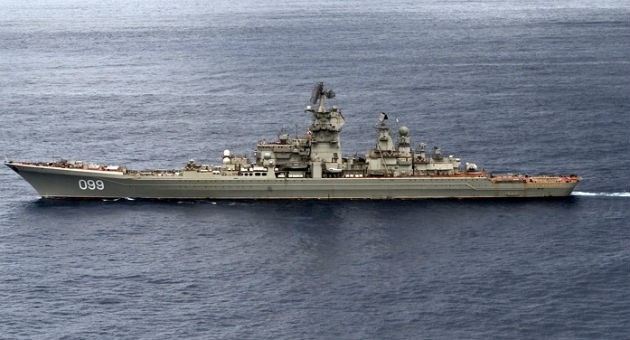 How We Achieved Naval Supremacy—And How We Could Lose It