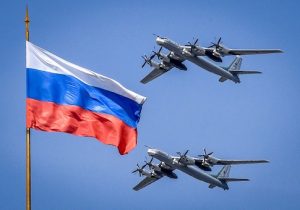 Russian nuclear forces dispatch two strategic bombers into the air defense zone near Alaska on Friday and the aircraft were intercepted by American F-22 jets, the U.S. Northern Command said.

The Russian bombers, which are nuclear capable, did not enter sovereign U.S. or Canadian airspace, he added.

Miller said there was no unusual activity related to the encounter and there were no communications between the F-22s and bombers.

"NORAD continues to monitor all air activity emanating from within and outside North American airspace," Miller said.

The spokesman provided no further details on the mission of the Russian bombers.

The latest bomber incursion appears to be part of a pattern of Russian nuclear coercion aimed at the United States.

"Putin's Russia is in the nuclear intimidation business and is willing to burn to lot unnecessary bomber fuel, not to mention the cost of refueling and additional maintenance hours resulting from the long flights just to make that point," said Mark Schneider, a former Pentagon strategic weapons expert.

A little over a year ago, two Bear bombers flew inside the ADIZ near Alaska and were accompanied by two Russian Su-35 Flanker fighter jets.

Alaska is the location of the Pentagon's strategic missile defense interceptor base at Fort Greely, Alaska, about 100 miles southeast of Fairbanks.

Much of Russian President Vladimir Putin's anti-U.S. rhetoric has been aimed at U.S. missile defenses that he has asserted are being deployed globally to counter Russian missiles.

The Pentagon has said U.S. missile defenses are not targeting Russian forces but are designed to counter North Korean ICBMs and future Iranian long-range missiles.

Fort Greely houses most of the 44 long-range Ground Based Interceptors capable of knocking out intercontinental ballistic missiles. Other GBI interceptors are deployed at Vandenberg Air Force Base, Calif.

Bear bombers are equipped with KH-55 air-launched cruise missiles as well as two of Russia's newer and more potent cruise missiles, the conventionally-armed KH-101, and the nuclear-tipped KH-101.

Schneider, the former Pentagon official, said some recent flights by Russian bombers have been protected by fighters and others have not.

"Irrespective of this, my perception is that the bomber ‘combat patrols' as Putin called them when he started them in 2007 are not realistic training for attack but rather nuclear intimidation flights," Schneider said.

"When you have nuclear-armed KH-55, KH-102, and nuclear capable KH-101 cruise missiles with ranges from thousands of kilometers to about 5,000-kilometers, it makes no sense to fly the bombers close enough to be intercepted," he said.

The reason Russian military forces conducted ADIZ intrusion flights is that if they stayed further away there would be no "intimidation effect" and probably no new coverage of the flights, Schneider said.

Earlier this month, a Russian Su-27 fighter jet made an unsafe intercept of a Navy P-8 surveillance aircraft over the Baltic Sea.