The report included a photograph of a large underwater vessel with a twin tail and wings.

According to the report, the submarine will be armed with six nuclear drones that have been labeled Kanyon by the Pentagon and Poseidon by the Russians. 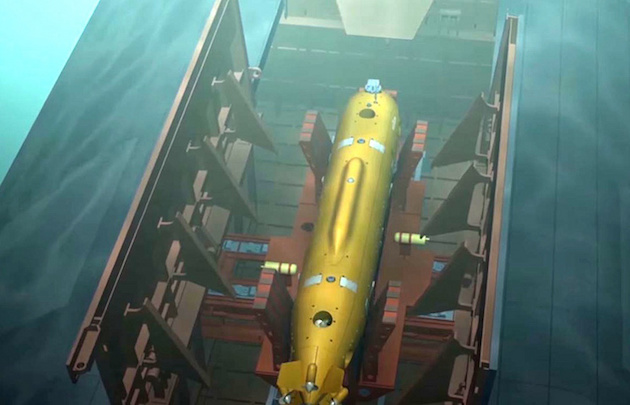 The new submarine appears to be a variant of one of Russia's Oscar-class, cruise missile-firing submarines first built in the 1992 and upgraded during the 2010s.

The report said details of the new submarine remain secret.

Mikhail Budnichenko, director of the shipyard, said during the launch ceremony that "the enterprise’s shipbuilders will fulfill all the tasks of building ships within the established timeframe and with high quality."

The submarine will be finished while afloat and TASS quoted a defense source saying the nuclear reactor will be tested later this year, with sea trials set for 2020 and deployment by the end of that year.

The Washington Free Beacon first reported the existence of the nuclear drone in 2015. Defense officials described the Kanyon as a weapon capable of blowing up entire ports and cities, such as Kings Bay, Ga. and Puget Sound in Washington state where U.S. nuclear missile submarines are based.

The Kanyon is one of several superweapons unveiled by Russian President Vladimir Putin designed to target the United States with strategic weapons in what the Russians have claimed is retaliation for U.S. missile defenses deployed in Europe.

U.S. intelligence agencies estimate the Kanyon will be outfitted with a warhead in the tens of megaton nuclear yield. A megaton is the equivalent of 1 million tons of TNT.

The Navy currently has no similar unmanned underwater vehicle weapon similar to the Kanyon. The service is developing a range of weapons-carrying drones.

The Pentagon is currently modernizing the U.S. nuclear arsenal with upgrades to communications, facilities, and two small nuclear warheads.

Air Force Gen. John Hyten, commander of the Strategic Command, told a Senate hearing in February that the nuclear drone is one of several new Russian strategic weapons designed to threaten the United States and highlight the need to modernize U.S. nuclear arms.

"Although some might consider these [U.S.] modernization plans expensive, I believe that America can afford survival," Hyten said.

"The only way to change our strategic deterrent is to convince our adversaries to reduce the threat. This is not occurring. China and Russia, in particular, are not only modernizing the traditional elements of their own triads, but are also building a myriad of additional nuclear capabilities to threaten the United States."

The 2018 Nuclear Posture Review also mentioned the Kanyon as one of Russia's nuclear arms, describing the system as "a new intercontinental, nuclear-armed, nuclear-powered, undersea autonomous torpedo."

"Since ports can be knocked out of action with much lower yield weapons, the purpose of Poseidon is murder of civilians by the tens of millions," Schneider said.

"That was the mission outlined in the leaked Kremlin briefing slide. We have nothing like it because it is a weapon of genocide. There is no way to limit damage when it is used and no way to use it consistent with the international law of armed conflict."

Schneider calculates that a single submarine armed with Kanyon bombs would release more radiation than the entire U.S. strategic arsenal.

The Kanyon also is not constrained by the 2010 New START arms treaty and Russian officials have said they will not agree to modify the treaty to bring it within the confines of the accord.

"Russia plans to initiate a nuclear war with precision low yield nuclear strikes," Schneider said. "The purpose of Poseidon is to attempt to deter a nuclear response by the threat of genocidal attacks."

U.S. nuclear policymakers have not stated how the United States would respond if Moscow were to carry out such strikes.

Schneider urged the U.S. government to issue a statement from a high-level U.S. official notifying the Russians that if they were to launch such attacks the United States will respond under the international legal doctrine called "belligerent response." In that response, the United States would destroy a comparable number of Russian cities.

"There is no nice way to deter the Putin regime from using weapons like Poseidon," he said. "If there is a negotiation on New START Treaty extension, this weapon should not be limited but banned."

The weapon will be used to attack aircraft carrier battle groups, shore defenses, and infrastructure with impunity, he said. They also will be armed with nuclear or conventional explosive warheads, Putin said.

"They are quiet, highly maneuverable and have hardly any vulnerabilities for the enemy to exploit. There is simply nothing in the world capable of withstanding them," Putin said, noting that the weapon was "not a bluff" and urging others to "stop rocking the boat we are all in and which is called the earth."

Other strategic weapons in development by the Russians include hypersonic strike vehicles, a nuclear-powered cruise missile and anti-satellite weapons.

Russian military officials have touted the nuclear drone as a way to counter the sea-based leg of U.S. global missile defenses.

Tass said the Kanyon will operate at a depth of more than half a mile and will be capable of traveling at speeds of over 125 miles per hour. One Russian report said the weapon will carry a 2 megaton warhead.