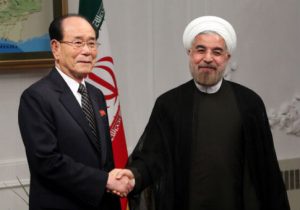 The U.S. government is becoming increasingly concerned about the depth of military cooperation between Iran and North Korea, with officials warning that high-level meetings between Iranian and North Korean contacts indicate efforts to deepen ties that may extend to weapons of mass destruction, according to a new report.

The report from the Washington Institute, an American think tank focused on U.S. foreign policy in the Middle East, details the extensive military cooperation between Tehran and Pyongyang and how recent developments have made the issue a top priority for the Trump administration.

"All of these contacts need to be better understood," one senior U.S. official working on the Middle East told the report's author, Jay Solomon, a visiting fellow at the institute and a former Wall Street Journal reporter. "This will be one of our top priorities."

President Donald Trump in September ordered U.S. intelligence agencies to conduct a review of any potential nuclear collaboration between Iran and North Korea.

Officials in the U.S., East Asia, and the Middle East who track the bilateral relationship indicate that Pyongyang and Tehran have "already signaled a commitment to jointly develop their ballistic missile systems and other military/scientific programs," Solomon writes. But a series of high-level meetings and secretive contacts have raised fears that cooperation between the two U.S. adversaries is only growing stronger.

Most notably, Kim Yong-nam, North Korea's No. 2 political leader and head of the country's legislature, visited Tehran in early August for up to 10 days. The official reason for the trip was to attend the inauguration of Iranian President Hassan Rouhani, but the length of his stay "raised alarm bells in Washington and allied capitals."

The visit was about more than Rouhani's inauguration, according to North Korean and Iranian state media. Kim and North Korean Vice Foreign Minister Choe Hui-chol inaugurated their country's new embassy in Tehran and held several bilateral meetings with foreign leaders, many from countries that have purchased North Korean weapons in recent decades—including Cuba, Namibia, Zimbabwe, and the Democratic Republic of the Congo.

Iran and North Korea also "presented a united front against Washington during Kim's stay," according to Solomon. After meeting with Speaker of Parliament Ali Larijani on Aug. 4, Kim said, "Iran and North Korea share a mutual enemy [the United States]. We firmly support Iran on its stance that missile development does not need to be authorized by any nation."

China and Russia appeared to support Kim's trip, according to Solomon. On his way to Iran, Kim first flew to Vladivostok, a city in eastern Russia, on Air Koryo, the North Korean airline that the U.S. Treasury Department sanctioned in December 2016 for financially aiding the North Korean regime and its ballistic missile program. He then flew to Tehran via Russia's state carrier, Aeroflot, passing through Chinese airspace.

Kim had previously visited Tehran in 2012, when he skipped most of the scheduled events to sign a bilateral scientific cooperation agreement with then-President Mahmoud Ahmadinejad. That agreement, according to U.S. intelligence officials, looked similar to the one Pyongyang signed with Syria in 2002.

One of the Iranian officials who attended the 2012 meeting with Kim was Atomic Energy Organization chief Fereydoun Abbasi-Davani, who the U.S. and U.N. sanctioned for his alleged role in nuclear weapons development. The U.N. has accused him and Iranian general Mohsen Fakhrizadeh of working closely together on nuclear weapons research.

The Washington Institute report also details a series of covert contacts that U.S. and South Korean intelligence services have tracked, describing a "steady stream of Iranian and North Korean officials visiting each other in a bid to jointly develop their defense systems." U.S. intelligence agencies, for example, have spotted Iranian defense officials in Pyongyang over the past year, the same period in which North Korea has significantly expanded its nuclear and long-range missile capabilities.

"Last year, U.S. authorities reported that missile technicians from one of Iran's most important defense companies, the Shahid Hemmat Industrial Group, had traveled to North Korea to help develop an eighty-ton rocket booster for ballistic missiles," the report adds. "One of the company's top officials, Sayyed Javad Musavi, has allegedly worked in tandem with the Korea Mining Development Trading Corp. (KOMID), which the United States and U.N. have sanctioned for being a central player in procuring equipment for Pyongyang's nuclear and ballistic missile programs."

All of these connections have raised concern in Washington and in allied capitals that Iran and North Korea may share dangerous technologies with each other.

Solomon goes on to describe how North Korea has emerged as a critical partner in Iran's so-called "Axis of Resistance," its alliance of states and non-state actors to challenge U.S. power in the Middle East. Pyongyang has supplied Syrian President Bashar al-Assad's regime with weapons and, according to current and former U.S. officials, has given arms to the Iranian-backed Houthi rebels in Yemen.

The report calls on the U.S. government to closely scrutinize known contacts between Iran and North Korea.

"Going forward, the most pressing question is whether a smoking gun will emerge proving direct nuclear cooperation between Iran and North Korea," Solomon writes. "The U.S. government and the International Atomic Energy Agency say they have yet to see such conclusive evidence. But Iranian opposition groups allege that senior regime officials have visited North Korea to observe some of its six nuclear weapons tests."