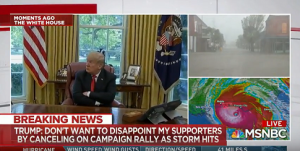 President Donald Trump on Wednesday said he has spoken to Saudi officials about missing journalist Jamal Khashoggi, but he said the details of the incident are unclear.

Turkish officials are investigating what happened to Khashoggi, a critic of the Saudi government who has been missing since he went to the Saudi consulate to get divorce papers early last week. Turkish police initially said Khashoggi was likely killed in the consulate, an allegation the Saudis denied.

Investigators are now reportedly focusing on a black Mercedes van which arrived at the consulate and left around the time Khashoggi was there. Officials are looking into whether the journalist may have been abducted.

"I assure you that the reports that suggest that Jamal Khashoggi went missing in the consulate in Istanbul or that the kingdom’s authorities have detained him or killed him are absolutely false, and baseless," said Prince Khalid bin Salman, Saudi Arabia’s ambassador to Washington.

Turkish officials have accused Saudi Arabia of not cooperating with the investigation into Khashoggi's disappearance.

The president said he is concerned Khashoggi is dead but reserved judgment on the Saudi government's possible involvement.

"I would be certainly concerned and in fact we have a call in to his wife," Trump said. "His wife wrote us a letter, and addressed it to my wife and myself. And we're in contact with her now and we want to bring her to the White House. It's a very sad situation. It's a very bad situation, and we want to get to the bottom of it."

Trump also said he has spoken to the Saudi government "at a very high level, the highest level" multiple times over the past couple days.