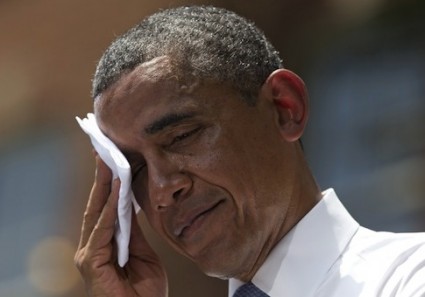 Not a single person showed up at the Georgetown waterfront Tuesday for a climate change agenda event put on by Organizing for Action, the shadowy nonprofit advocacy group born out of President Obama's 2012 campaign, the NRCC wrote in its blog.

The event page for the "Climate Change Day of Action Rally" disappeared after rainy weather appeared to drive away whatever people planned to attend. The embarrassing showing follows the news that only one volunteer stayed for an OFA Obamacare event in Centreville, Va., last week to work the phones:

ZERO PEOPLE at the OFA rally at the Georgetown Waterfront this morning. OMG CLIMATE CHANGE IS SUPER IMPORTANT… unless it rains.

Now that I’ve had Phil Kerpen write half my post for me, here’s the other half: it should surprise nobody – including the, ah, enthusiasts over at OfA, bless their hearts – that global warming doesn’t have nearly the same bite to it that the Left desperately wants it to. The polling is consistent: global warming – or climate change, or whatever the latest buzzword is/will be – is at the bottom of any list of things that people worry about, or prioritize. It is thus unsurprising that an admittedly unpleasant sudden rain shower would stop people in Georgetown from attending: after all, OfA doesn’t really want to talk about global warming at all. It’s just that the two things that they should be talking about – the economy, and health care – are also two things that OfA does not dare talk about, largely because President Barack Obama clearly has no idea how to go about repairing the damage that he’s caused to either.