A State Department official closely involved in the Obama administration’s Iran push has been promoting publications from anti-Semitic conspiracy sites and other radical websites that demonize American Jewish groups and Israel, according to sources and documents obtained by the Washington Free Beacon.

Alan Eyre, the State Department’s Persian-language spokesman and a member of the negotiating delegation that struck a nuclear deal with Iran earlier this year, has in recent months disseminated articles that linked American-Jewish skeptics of the deal to shadowy financial networks, sought to soften the image of Iranian terrorists with American blood on their hands, and linked deal criticism to a vast "neoconservative worldview."

Eyre described the one article, penned by the anti-Israel conspiracy theorist Stephen Walt, as having an "interesting thesis."

Insiders who spoke to the Free Beacon about Eyre’s private postings pointed to a pattern of partisanship and called it a sign that key officials at the State Department are biased against the state of Israel. Such criticism has dogged the team Obama since the early days of the administration.

Eyre regularly briefed U.S. officials at the negotiating table and was responsible for proofreading draft texts of the recent Iranian nuclear agreement.

While Eyre has a public Facebook page officially sponsored by the State Department, screenshots taken from his private personal account obtained by the Free Beacon include content that insiders described as concerning.

In one Feb. 13 posting, when Iran talks were at a critical stage, Eyre disseminated a link to an article praising Iranian Quds Force Chief Ghassem Suleimani, who is directly responsible for the deaths of Americans abroad. 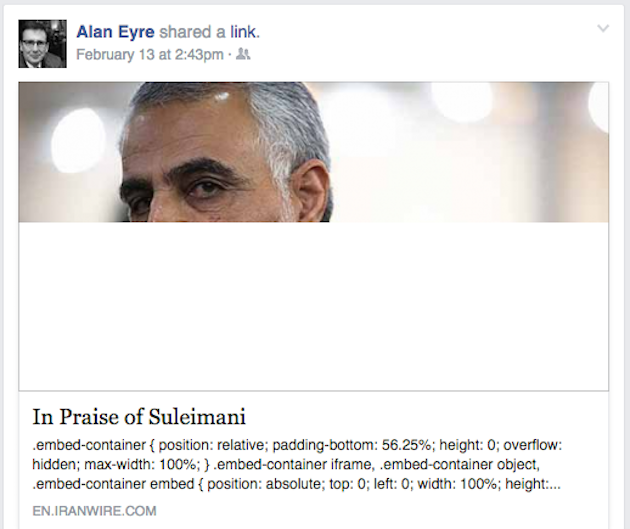 Suleimani, who is listed as a terrorist by the U.S. State Department, will have international sanctions against him waived under the parameters of the nuclear accord.

In another posting from Feb. 5, Eyre links to the website LobeBlog, which is viewed by critics as anti-Israel and regularly attacks neoconservative pundits."

The article Eyre links to, "Who Are the Billionaires Attacking Obama’s Iran Diplomacy," attacks opponents of the Iranian deal and insinuates that wealthy Jewish donors are behind this push.

The article puts particular emphasis on the Israel Project (TIP), a non-profit advocacy organization run by Josh Block, a longtime Democrat, and claimed that wealthy Jewish individuals were behind a stealth campaign to kill the deal. TIP is portrayed as playing a crucial role in discrediting the deal and convincing lawmakers to take a stance against it.

The article was penned by a former ThinkProgress blogger, Eli Clifton, who was forced out of the Center for American Progress-backed blog following a scandal in which several writers accused Iran deal critics of being "Israel firsters." 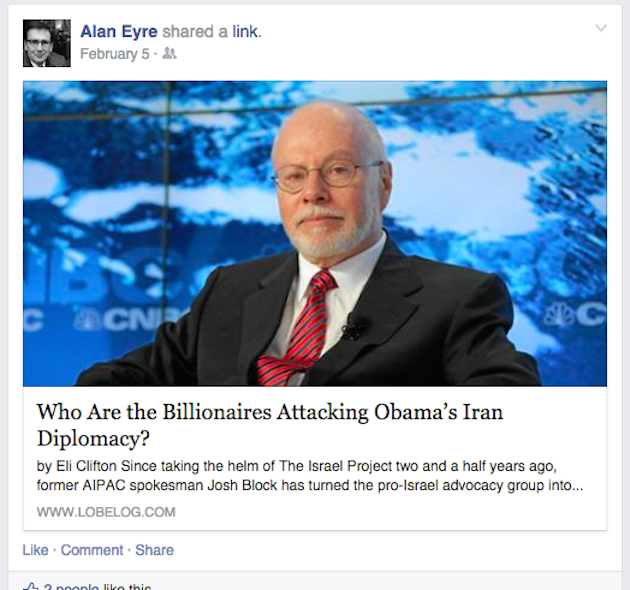 In another posting, Eyre links to an article by Stephen Walt, co-author of the book The Israel Lobby, which has been branded by the Anti-Defamation League (ADL) as an "anti-Jewish screed."

Walt lashes out in the piece at neoconservative critics of the Iran deal, writing that "no one should listen to their advice today."

Eyre linked to the piece with the comment, "interesting thesis." He then quoted Walt at length, according to a screenshot:

The real problem is that the neoconservative worldview — one that still informs the thinking of many of the groups and individuals who are most vocal in opposing the Iran deal — is fundamentally flawed. Getting Iraq wrong wasn’t just an unfortunate miscalculation, it happened because their theories of world politics were dubious and their understanding of how the world works was goofy. 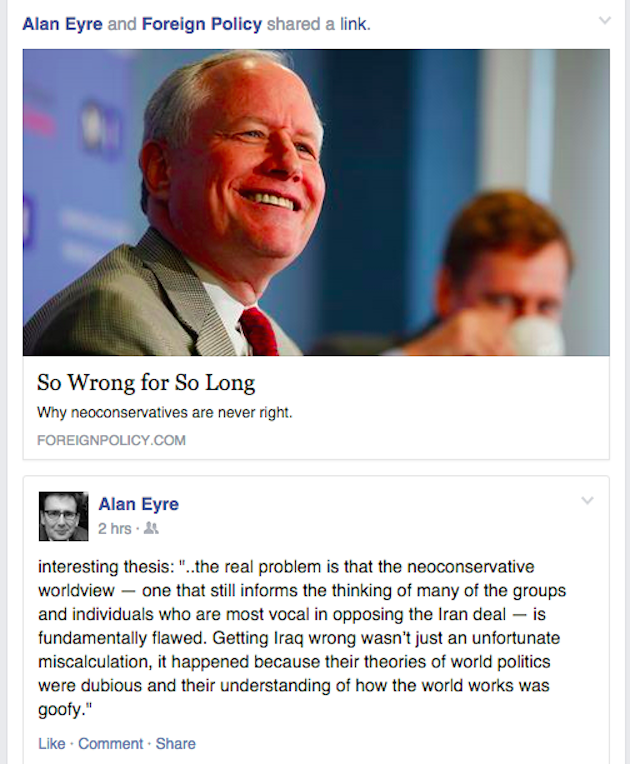 Eyre links to a March 9 Washington Post article by Paul Pillar, an Israel critic who backs boycotts of the Jewish state, titled ‘The misguided, condescending letter from Republican senators to Iran.’ He then opined in the post, "Seriously. Can someone write them a letter telling them that the most fundamental duty of Congress is to pass a budget?" 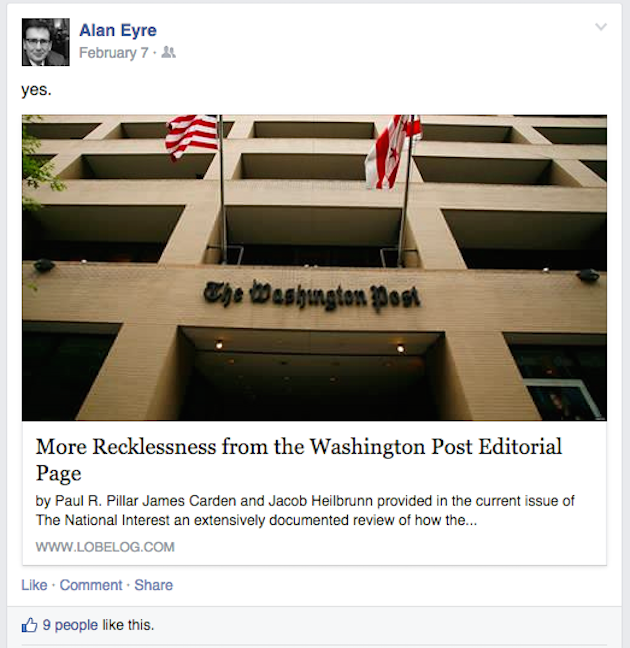 At least one of Eyre’s Facebook friends has quibbled with his postings.

When Eyre linked to a Talking Points Memo article claiming that "49 percent of Republicans don’t believe in evolution," one critic commented: "This post is total crap. Some 300 people were polled, and the polling criteria were, of course, not specified. This outfit has a deserved reputation as a left-leaning, professionally anti-Republican Flak Tank."

Eyre dismissed that criticism, responding, "If you are going to fact check every incendiary posting I put up, it is going to detract from the sum total of my facebook-derived frivolity."

In addition to his postings, Eyre has appeared as a keynote speaker at the National Iranian American Council’s Washington, D.C., conference.

The council, which has been accused as serving as a pro-Tehran lobbying shop, has helped the Obama administration disseminate pro-Iran talking points and champion the deal in the public sphere. Its top officials also have insinuated that Jewish lawmakers who oppose the deal have more loyalty to Israel than America.

One senior official at a Washington, D.C., pro-Israel organization expressed disappointment but not surprise at Eyre’s posting.

"The easiest way to explain the State Department’s behavior toward the Middle East is to assume that they don’t like the Israelis very much and they have this romantic fascination with Iran," the source said. "That’s what you’re seeing here."

"Of course they can’t admit that out loud, because the American people believe exactly the opposite, so they do it through passive-aggressive Facebook posts and occasional slips of the tongue about how moderate and sophisticated the Iranians are," the source added.

A State Department spokesman declined to comment on Eyre’s personal postings when contacted by the Free Beacon.

"Alan Eyre is the Department’s Persian Language Spokesperson," the official said. "In that capacity, he maintains his official page on Facebook here," the spokesman continued, providing a link to the page.

The Facebook page in question, however, is separate from Eyre’s public-facing personal page referenced by the State Department, which said it had no knowledge of the second page.

"We’re not aware of any such content that you refer to posted on that account," the official said.

The official did not respond to follow-up requests asking for comment from Eyre on the postings.