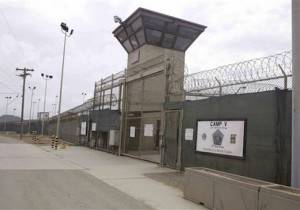 The Obama administration ordered the Pentagon to spend U.S. taxpayer funds for a domestic search of "possible Guantanamo detainee relocation" sites, according to documents obtained by the Free Beacon. United States law bars the administration from spending taxpayer money on its effort to move Gitmo inmates onto American soil.

The disclosure has prompted a congressional inquiry to determine who in the Obama administration ordered the relocation search and how taxpayer funds were authorized for that purpose, according to a formal letter sent by lawmakers to the Defense Department on Monday and obtained by the Free Beacon.

The disclosure of this activity by the Obama administration has renewed concerns on Capitol Hill that the White House will make a last-minute effort to shutter the Gitmo prison and ship the remaining inmates to the United States, despite laws prohibiting the transfers.

Schmidt obtained this information from the Pentagon only after threatening to sue the administration for its refusal to produce documentation on the matter.

"While the amount of money is relatively small—a total of$25,909.53, of which $7,687.20 was spent on the site survey for Fort Leavenworth—the admission raises the concern that the Department of Defense violated the law by knowingly expending these funds while federal law enacted by Congress expressly prohibited the agency from doing so," Schmidt informed lawmakers in the letter, a copy of which was obtained by the Free Beacon.

The administration’s behavior has raised concerns in Congress that it is secretly planning to relocate detainees to United States cities without informing local officials and residents.

Rep. Mike Pompeo (R., Kansas) told the Free Beacon that Americans should not have the most "hardened terrorists" secretly transferred to their towns by the Obama administration.

"Americans, and particularly Kansans, understand that President Obama’s desire to bring hardened terrorists from Guantanamo Bay to the U.S. would make our country less safe," Pompeo said. "In completing these site surveys, the Department of Defense followed neither the letter, nor the spirit of American law. I am proud to stand with my colleagues in condemning this illegal action and encouraging all states to pursue appropriate legal action."

Pompeo, along with fellow Kansas Republican Reps. Lynn Jenkins and Kevin Yoder, are demanding the Pentagon explain its intentions and why it violated U.S. law in its effort to bring Gitmo inmates to America, according to the Monday letter obtained by the Free Beacon.

"Rather than spending zero dollars on site surveys, as mandated by U.S. law, the Department of Defense has spent over $25,000," the lawmakers wrote. "This is following neither the letter, nor the spirit of the law."

The lawmakers seek to determine who in the Pentagon authorized the site surveys, when they took place, and how the taxpayer funds were spent, according to the inquiry. The letter also demanded the names of Obama administration officials and outside contractors who participated in the Gitmo relocation sites surveys.

"We stand with our Senate colleagues in condemning this illegal action and encouraging all states to pursue the appropriate legal action in response," the lawmakers concluded.

Guantanamo Bay inmates who have been released continue to reengage in terrorism. At least two former inmates have participated in terror operations against U.S. forces since January.

The Obama administration continues to pursue an aggressive effort to free as many inmates as possible before leaving office.