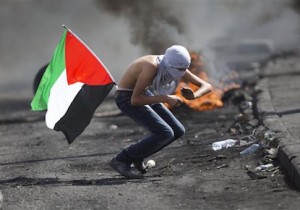 As Palestinians assailants continue to murder Jews across Israel, the Obama administration on Wednesday accused the Jewish state of committing acts of "terrorism," drawing outrage from many observers.

As the number of Israelis murdered during a streak of Palestinian terrorism continues to rise, the Obama administration sought to equate the sides and told reporters that, in its view, Israel is guilty of terrorism.

"Individuals on both sides of this divide are—have proven capable of, and in our view, are guilty of acts of terrorism," State Department Spokesman John Kirby told reporters following questions about the spike in violence.

Kirby also said the administration has obtained "credible reports" of Israelis using excessive force as it deals with a rash of terrorist murders carried out by Palestinians seeking to cause havoc and spark an intifada.

"We're always concerned about credible reports of excessive use of force against civilians, and we routinely raise our concerns about that."

At least three Israelis have been killed and another 20 wounded as a result of attacks by Palestinian terrorists in recent days.

The violence has prompted pushback from the Obama administration, much of it aimed at Israeli itself.

Secretary of State John Kerry, for instance, said he sympathized with Palestinian "frustration" in a statement that accused Israel of boosting the construction of so-called "settlements," or Jewish homes in historically Jewish areas of the country.

"There’s been a massive increase in settlements over the course of the last years," Kerry said. "Now you have this violence because there’s a frustration that is growing, and a frustration among Israelis who don’t see any movement."

Settlement growth has not actually increased in Israel, according to former White House national security adviser Elliott Abrams, who recently criticized Kerry for promoting false views of the Jewish state amid the sharp rise in terrorism.

Other insiders who work closely with the Israeli government called the administration’s push to equate Palestinian terrorism with Israeli policing measures a "disgrace."

"The administration's position is a disgrace," said one senior official with a prominent pro-Israel organization. "Our democratic Israeli allies are on the front lines in an actual war against terrorists stabbing Jews in the street, and the White House is making up stories about Israeli malfeasance and blaming terror victims."

Lawmakers on Capitol Hill struck a different tone from the Obama administration when discussing the spike in violence.

Sen. Ted Cruz (R., Texas) blamed the Palestinian government for glorifying terrorism and urging its citizens to strike out at Jewish people.

Palestinian religious figures and other prominent individuals have taken to social media and television outlets in recent days to celebrate the rash of stabbings and demand that more take place.

"These attacks have been incubated by the continued incitement and glorification of violence by the Palestinian leadership, most recently by President Mahmoud Abbas during his address at the United Nations General Assembly," Cruz said in a statement.

"He still has yet to categorically condemn these attacks. It is long past time for the United States and the international community to hold the Palestinians accountable for their incitement and support for terrorism, including through the financial payment to Palestinian terrorists who are jailed in Israel for committing acts of terrorism."

Rep. Ileana Ros-Lehtinen (R., Fla.) said the violence proves the Palestinians are not a viable partner for peace.

"I condemn the recent violence and murders against Israeli citizens but it reaffirms once again how Israel's supposed partner for peace, the Palestinian Authority, has been engaged in a vicious campaign of incitement to violence," Ros-Lehtinen said.

Ros-Lehtinen and Rep. Ted Deutch (D., Fla.) has authored a House resolution expressing concern over the rise in anti-Semitic violence and calling on the Palestinian Authority to cease its incitement.

"In order to help restore some peace and stability within the region, the Obama administration needs to do more to support Israel," Ros-Lehtinen said.

"It is critical that the Obama administration and Congress press Palestinian Authority President Mahmoud Abbas, who regrettably used his speech before the United Nations General Assembly to worsen tensions, to act decisively to end the growing wave of Palestinian violence and return to bilateral peace negotiations with Israel," Kirk said.