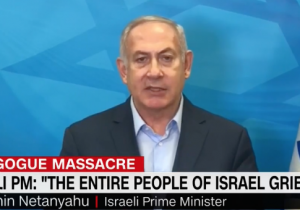 Israeli Prime Minister Benjamin Netanyahu on Saturday issued a statement in response to the Pittsburgh synagogue shooting, saying that he was "heartbroken and appalled."

"I was heartbroken and appalled by the murderous attack on a Pittsburgh synagogue today," Netanyahu said.

Robert Bowers surrendered to authorities Saturday after he went on a shooting rampage at the Tree of Life synagogue, where he killed 11 people and injured several others. According to a federal law enforcement official, he made anti-Semitic statements during the shooting and targeted Jews on social media.

Attorney General Jeff Sessions released a statement saying the Department of Justice will file hate crimes and other criminal charges against Bowers, the defendant, including charges that could potentially lead to the death penalty.

"The Department of Justice will continue to support our state and local partners and we will continue to bring the full force of the law against anyone who would violate the civil rights of the American people," Sessions said.