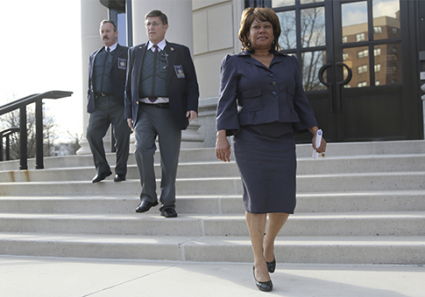 Jasmin and her deputy mayor, Joseph Desmaret, allegedly accepted financial benefits from a federal law enforcement agent posing as a real estate developer, in exchange for her pledge to support the developer’s company, according to a statement released by the FBI.

"In exchange for her vote awarding the real estate project to the company, Jasmin demanded a partnership interest in the company,’" said the FBI. "When the [undercover agent] later suggested that Jasmin have a 20 percent stake in the project, she replied, ‘Partnership is 50-50, right?’"

"[Jasmin] also coached two other individuals, whom she understood were associates of the [undercover agent] and who would pose as competing developers, but who were actually undercover FBI agents, on how to make their presentation to the Village Board. In addition, both Jasmin and Desmaret agreed to steer to the UC’s company the New York State funding for road work that Smith agreed to help the CW and the UC obtain," continued the press release.

Jasmin and Desmaret both face up to 20 years in prison for five and six counts of mail fraud, respectively.

While Jasmin was listed as a MAIG member on its official website as recently as March 27, she was no longer on the list yesterday.

An official who answered the phone at Jasmin’s office expressed surprise that the mayor’s name was removed, and said she did not know whether Jasmin had been dropped as a member. Mayor Michael Bloomberg’s office and a spokesman for MAIG did not respond to requests for comment.

Jasmin is not the first member of MAIG to run afoul of the law.

MAIG Mayor James Schiliro of Marcus Hook, Penn. was arrested in late March for reckless endangerment after allegedly firing a gun in his home during an argument with a 20-year-old man over a sex act.

MAIG Mayor Craig Lowe of Gainesville, Fla. was charged with driving under the influence and property damage after police found him asleep in his car at the scene of a crash.

Other members and former members of MAIG have been charged with a range of offenses, including felony corruption, assault of a police officer, and child sex crimes.