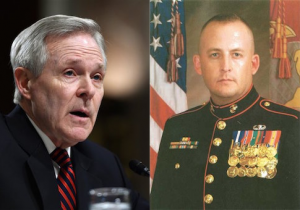 A Marine war hero who helped conduct the Marine Corps’ study on females in combat operations criticized the secretary of the Navy for questioning the legitimacy of the report’s findings.

In a post to his Facebook page this weekend that has since been taken down, Sgt. Maj. Justin LeHew called Navy Secretary Ray Mabus "way off base" for claiming that the individuals who conducted the study were biased against women from the beginning.

"The Secretary of the Navy is way off base on this and to say the things he is saying is … flat out counter to the interests of national security and is unfair to the women who participated in this study," LeHew wrote. "No one went into this with the mentality that we did not want this to succeed. No Marine, regardless of gender would do that."

LeHew, who received the country’s second-highest valor award in 2004, helped conduct the nine-month study of troops in the Ground Combat Element Integrated Task Force as the top enlisted leader with Marine Corps Training and Education Command. The findings indicate that women are more vulnerable to injury, less accurate with weapons, and slower than men when completing tactical movements.

In remarks to NPR last week, Mabus responded to the study’s conclusions by claiming that its participants and organizers "started out with a fairly large component of the men thinking this is not a good idea, and women will not be able to do this."

"When you start out with that mindset, you’re almost presupposing the outcome," Mabus continued. He also described conclusions of the study as inaccurate.

LeHew said Mabus’ dismissal of the study shows that he cares more about allowing anyone into combat operations than truly protecting American national security.

"Listen up folks," LeHew wrote. "Your senior leadership of this country does not want to see America overwhelmingly succeed on the battlefield, it wants to ensure that everyone has the opportunity to [pursue] whatever they want regardless of the outcome on national security."

The Marine leader said that there is nothing biased about choosing only the most effective service members to fulfill infantry roles.

"In this realm, you want your fastest, most fit, most physical and most lethal person you can possibly put on the battlefield to overwhelm the enemy’s ability to counter what you are throwing at them and in every test case, that person has turned out to be a man," LeHew explained. "There is nothing gender bias about this, it is what it is. "

"In this country we preach equality. But to place these mandates on the military before this country has even considered making females register, just like males, for the selective service is in all aspects out of touch with reality," he continued.

LeHew said that, until women are required to register for selective service, military leaders are "wasting" time considering opening the infantry up to women.

In 2004, LeHew was awarded the Navy Cross for evacuating four soldiers and recovering nine dead and wounded Marines amid enemy fire after an ambush in Iraq in 2003.

The Marine Corps study found that female service members were injured twice as often as men, demonstrated less accuracy with infantry weapons, were slower than men when completing tactical movements, and did not perform as well when removing injured troops from the battlefield.

This fall, services are required to hand over recommendations to Defense Secretary Ash Carter as to whether certain positions in the military should remain closed to women.