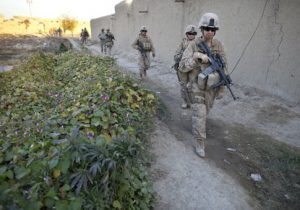 The change is the latest easing of IOC requirements. In November, Marine Corps Commandant General Robert Neller quietly dropped the demanding Combat Endurance Test as a must-pass requirement to graduate from the 13-week course.

A former Marine Infantry Officer, who now serves as a congressional aide, said the modifications to IOC have raised flags among service members who feared the Corps would lower standards after the Obama administration opened all military combat roles to women in 2015.

The aide said the change to the hiking requirement is particularly alarming.

"Hiking is such an integral part of leading your Marines, whether in training or some of the combat situations we're in, and the idea of an officer not being able to stay with his men and, in fact, lead his men from the front on a hike is beyond the pale," the aide said.

"It's not just for show, we actually use those skills when we're in combat and when we're moving from position-to-position. Hiking with a full combat load is one of the truer tests of all the different physical requirements and mental fortitude requirements needed to lead a platoon."

Brig. Gen. Jason Bohm, the commanding officer of Marine Corps Training Command, told reporters on Friday "the principal driver behind" modifications to the course is to lower attrition rates, which are currently under 10 percent. Bohm said he would like those numbers at or below 5 percent.

The changes, he said, are meant to make "students more successful to complete the course."

"The idea that there's only one lever you can pull here—and that lever is to make graduating from IOC easier—is crazy," the former Marine Infantry Officer said. "It jeopardizes the ability of the unit to ultimately accomplish its mission and the ability of the unit to accomplish its mission without taking an unacceptable level of casualties. The stakes are too high."