Gottheimer initially broke ranks with the Democrats to vote with Republicans in support of an amendment that would have paved the way for Israel to receive more than $300 million in emergency dollars for its missile defense programs. The measure, which was offered as an amendment to a bill to increase security in and around the Capitol complex, ultimately failed last Thursday along a mostly party-line vote of 218-209.

Gottheimer switched his vote from "Yea" to "Nay" after Hoyer strong-armed him on the House floor, according to multiple witnesses. The confrontation illustrates the immense pressure Democrats are under to oppose issues championed by Republicans—even the historically bipartisan United States-Israel security alliance. The alliance has become increasingly politicized in recent weeks as the Democratic Party's anti-Israel flank pushes for aid to be suspended.

After Gottheimer registered his vote in favor of the Iron Dome funding amendment, Hoyer pulled him aside for an intense conversation, according to one member of Congress who witnessed the exchange but asked to remain anonymous. Two other sources confirmed the lawmaker's account.

Gottheimer was officially registered as a "Yea" vote, according to the official congressional record on that day. He and several other lawmakers eventually changed their position on the measure before voting on the matter closed, the congressional record shows. Video of the House floor by C-SPAN also shows Gottheimer walking up to change his vote.

"Steny was telling him it was going to be alright and not to worry," said the lawmaker who witnessed the exchange. "He had his arm around him and was stroking his shoulder. I guess Steny got him to change his vote." Gottheimer "looked like he'd seen a ghost" after the conversation, the member said.

A spokesman for Gottheimer declined to comment on the matter.

A spokesman for Hoyer said his office does "not comment on private Member conversations."

The Hoyer spokesman said the vote was not related to Iron Dome funding. Republicans brought the measure up for consideration under a procedural move known as a "motion to recommit." That would have paved the way for Iron Dome funding to be included as an amendment to the Capitol security funding bill. Democrats who voted against the amendment say Republicans only brought the measure up for consideration to embarrass those who voted against it.

The money would have been sent to Israel as part of a $3.8 billion security agreement with America, which has historically received broad, bipartisan support. At least $73 million would have been allocated for the Iron Dome system. Another $177 million would have gone toward short-range ballistic missile defense and $77 million for Israel's Arrow III program, a more sophisticated missile system that intercepts incoming munitions higher in the sky.

Democrats also rejected a Republican-led effort last week to hold a vote on legislation that would impose additional sanctions on Hamas. Democrats along a mostly party-line vote rejected that bid. 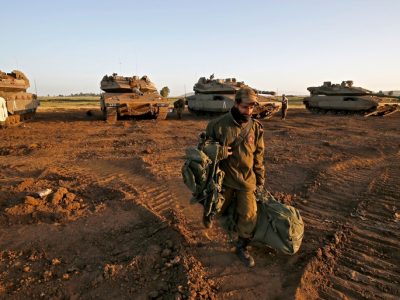