TRIPOLI, Lebanon (Reuters) – The number of Syrian refugees who have fled to Lebanon officially topped 1 million on Thursday, highlighting the growing humanitarian catastrophe caused by Syria's civil war and the huge burden placed on its poorly prepared neighbors.

The United Nations refugee agency UNHCR marked what it called a devastating milestone by formally registering a 18-year-old student from the city of Homs as the millionth refugee at a ceremony in Lebanon's Mediterranean city of Tripoli.

After three years of conflict sparked by protests against President Bashar al-Assad's autocratic rule, Syria's war has caused one of the greatest upheavals seen in the Middle East – and one which shows no sign of abating.

With a population of just 4 million, Lebanon now has the highest per capita concentration of refugees worldwide, an influx which the government has described as an existential threat in a country scarred by its own volatile history.

School-aged refugees eclipse the number of Lebanese children in the country's state schools, the UN says, and 2,500 new refugees are registered every day.

"The extent of the human tragedy is not just the recitation of numbers," UNHCR representative Ninette Kelley told reporters in Tripoli. "Each one of these numbers represents a human life who … have lost their homes, their family members, their sense of future."

Syrians have also fled to Turkey, Iraq, Jordan and Egypt, and the official total of 2.6 million refugees – which understates the scale of the exodus – means Syrians will soon overtake Afghans as the world's biggest refugee population.

Many millions more have been displaced inside Syria, and the pace has only accelerated in the last 12 months.

In April 2013, two years after the Syrian crisis erupted, there were 356,000 refugees in Lebanon. That number has nearly tripled in the last 12 months.

"The influx of a million refugees would be massive in any country. For Lebanon, a small nation beset by internal difficulties, the impact is staggering," UN High Commissioner for Refugees Antonio Guterres said in a statement.

BLOODSHED AND LACK OF FUNDS

Alongside the wave of refugees spilling over from Syria have come outbreaks of violence in Lebanon, where sectarian divisions reflect those of its larger neighbor.

Bombings and rocket attacks from the capital of Beirut to the Bekaa Valley and deadly street fights in Tripoli between Sunni Muslims who mainly support Syria's rebels and Alawites who back Assad have all shaken Lebanon's stability.

The bloodshed has contributed to a sharp fall in economic growth just as the refugee arrivals have put extra demand on services such as power, water, education and health facilities.

The World Bank says Lebanon's small economy is losing $900 million a year as a direct result of the crisis.

A regional appeal for $1.7 billion in 2014 to help the refugees is only 14-percent funded, forcing UNHCR and other aid agencies to focus help on only the most pressing cases.

The human cost of that funding shortfall was highlighted in March when refugee Mariam al-Khawli, who fled Syria with her husband and four children two years ago, set herself on fire in frustration at living for six months without the food and cash lifeline provided by the United Nations.

Khawli's family relied on the aid because her husband has a lung abscess and cannot work and three of her children have blood conditions. Her doctor said Khawli now has 70 percent burns and will need months of treatment if she survives.

The United Nations says the need to support Lebanon is growing more urgent, not only for humanitarian reasons but because the security of the Middle East is at stake.

"International support to government institutions and local communities is at a level that, although slowly increasing, is totally out of proportion with what is needed," Guterres said.

"Support to Lebanon … is also badly needed to stop the further erosion of peace and security in this fragile society, and indeed the whole region." 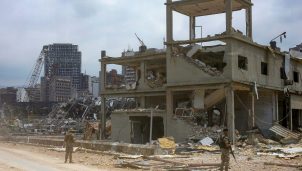